With a recent wave of gay Asian tourists flocking to Taipei for holiday, the city is being dubbed the San Francisco of Asia, and the government might do well to take notice.

When Justin Li, a bank worker in Taipei, attended Club Jump’s annual Christmas Eve bash a couple of years back, he was stunned by what he heard through the cacophony of music and gay male partygoers. 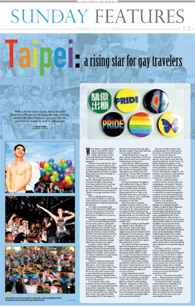 “Whether I was at the bar for a drink or lining up to use the washroom, all I could hear was people speaking English.” Gazing at the sprawling dance floor and its undulating sweaty bodies, he realized Taipei’s gay scene was in the midst of significant change.

Since the second half of the last decade, Taipei’s gay community has witnessed an influx of gay tourists from Japan, South Korea, Hong Kong, Singapore, Malaysia and Australia descending upon it for holiday, elevating the city’s status from the gay capital of Taiwan to a top gay destination for all of Asia.

While no official numbers exist, a recent survey by Fridae, an online gay media and services company, reveals a growing interest in Taipei among regional gay travelers.

According to unpublished data from its 2010 Asia Internet MSM (men who have sex with men) Sex Survey of almost 15,000 gay men, 9 percent had traveled to Taiwan in the past six months alone.

“Taiwan is increasingly a destination of choice for the discerning gay traveler because of its profile as a progressive society which embraces diversity,” says Fridae CEO Stuart Koe (古志耀). “News about Taiwan’s gay-friendly government and policies has been reported widely by Fridae and other international media, and the Internet has contributed to an increased awareness of the vibrancy of Taiwan’s gay community amongst affluent gay travelers in the region.”

“Taipei is a rising star for gay and lesbian travel,” says general manager Michael Lee. “A lot of gay people in Australia don’t know about Taipei. They would rather go to London or Europe. We are the only travel company in the country which has put out a gay and lesbian travel guide to Taipei and since its release in February, we have received well over 100 inquiries.”