“Due to the disappointing results of the fundraising campaign for the Hong Kong Pride Parade 2009, our committee has decided to suspend the event this year. Simultaneously we have launched the fundraising campaign for the Pride Parade 2011, and target to reach a minimum of HK$140,000 (US$18,000) before March 2011. In order to have an impressive event for our community again, we sincerely invite you to proudly support us.” The statement issued in August this year (in Chinese) by the Hong Kong Pride Organizing Committee was something of a shock, though the news had started to filter out after the Pride Committee had met back in July. The baldness of the statement did little to explain the situation and aroused more curiosity than it perhaps warranted. Speculation was rife.

Was the Committee throwing in the towel? Was infighting within the community behind the apparent collapse of this year’s plans? And just what had happened to make 2009 such a disastrous year financially for the Parade?

The issue quickly became a small controversy that reached the pages of Hong Kong’s major English language daily the South China Morning Post, which carried a piece in September focussing on allegations from an unnamed source at the Chinese University of Hong Kong, a source apparently taking the opportunity of criticising the Pride Committee for kowtowing to the forces of exhibitionism and commercialism. The cancellation of the event, according to this line, had some sort of political significance and the Parade was ripe for reform. The story was muddied by repetition of the ‘source’s’ own idiosyncratic prejudices; he or she objected to drag queens and bdsm exhibitionists joining the parade, and seemingly to anyone having fun, preferring, it seemed, a sedate stroll down the street in Sunday best. In itself, perhaps, this was an indication that the Post didn’t really have a story after all. But there was more to this than the Post’s stringer had discovered, for there is genuine anger in the community that the event has been cancelled, that it was cancelled at such short notice that no one else could step in to rescue it, and that this had been allowed to happen apparently without much consultation.

Brian Leung took up the issue on his Saturday night RTHK show We Are Family. He invited Wai Wai, a representative of the Women Coalition, to speak on behalf of the Pride Committee (Women Coalition of HKSAR has from its inception been the leading element behind the Parade) and added some other voices from the community, including the Tongzhi Community Joint Meeting (TCJM)’s Billy Leung, to probe the Committee’s position. The programme can be heard, for the Cantonese speakers amongst you, at: faitunes.com/?p=2081 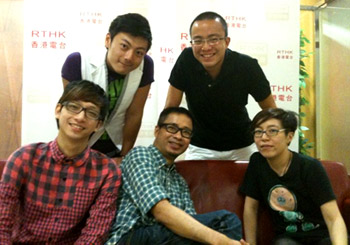 The Pride Organizing Committee consists of the following Hong Kong LGBT organisations: Women Coalition of HKSAR, Rainbow of Hong Kong, Nutong Xueshe and Gay Harmony. After the programme, these realised that there was a need to further explain their position to the community, so they issued a second statement, also in Chinese. Translated, this commences: “We are sorry! We are sorry that Pride 2010 has been suspended. To understand why, we will have to bring the story back to 2008”, which the statement then does, but its history of the years 2008-9 does not at all clarify what is going on now, though it contains an indication as to part of the trouble in the line describing the parade’s first year, 2008: “in just a little over three months. [my italics] Hong Kong Pride Parade was born.” The statement makes clear that in 2009 the Committee expended HK$118,300 against which they managed to raise only about H$70,000, covering the deficit by using money accumulated for earlier years’ IDAHO parades.

I should add here that up until 2009, IDAHO events had been run by an Organising Committee that was largely the same as that for the Pride Parade. IDAHO had in effect given birth to Hong Kong’s Pride. In March 2010, however, the key organisations that had formed the IDAHO Organizing Committee announced that they would not carry on running IDAHO in May. Despite the short notice, the TCJM led a group of other organisations to run the event in their place and raised new funds to do so. This earlier withdrawal, of course, made the speculation about the subsequent cancellation of the Pride Parade by the same people even more rife. Were they withdrawing from community events altogether? 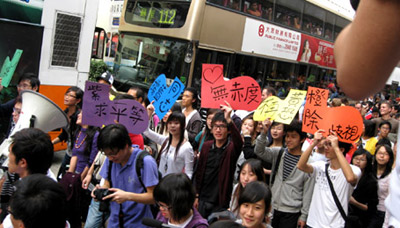 “We know that you can’t bear us not having the Hong Kong Pride Parade this year. We hugged, sweated, laughed, sang on the street and on the stage. Your sweat, laughter, heartbeat and shadows make Pride a lovely, shining picture. Hong Kong Pride Parade belongs to you and me, it belongs to us, it belongs to equality, diversity, and to all those who love life and enjoy freedom. Even though we are back to zero, we know your passion is still there. We look forward seeing you at Pride 2011.”

None of which, of course, explains why they could not plan and raise money in 2010, and so leaves the story hanging, though it does confirm that they intend to go on.

Faced with this, much of the rest of the community, led by the TCJM, has got together to create an event to mark, but not replace, the period in the calendar in which the third Pride Parade had been expected. This event is ‘Out in the Open’, ‘a festival of fun and diversity’ which will be held at the Bauhinia Beach Club, Middle Bay, between 2 pm and midnight on Sunday 24 October. There’ll be games, on the beach and in the sea, competitions, displays, music spun by DJ Brian Leung and dancing into the night. All will be welcome to an event (for which there’ll be no entrance fee) which it is hoped will take place annually in future near the Pride Parade to entertain many of those who march in it.

So just what is going on with the Pride Parade? There is no vast overhanging debt which has had to be worked off this year. There is no reason, in these times of increasing economic prosperity, why more funds could not have been found – the money is flowing again in Hong Kong. Is there something more significant below the surface?

Well, I am glad to be able to report, somewhat anticlimactically, that there is an issue here but it is not one of any real political significance or one that will cause lasting harm. It seems that the Organizing Committee has buckled under the fatigue that has built up after running five IDAHOs and two Prides and is just in desperate need of a rest. The amount of effort involved in creating and managing these events is immense and they are incredibly time-consuming. Women Coalition, for instance, shouldering much of the burden, has had its advocacy, counselling and community work disrupted regularly for the past half decade and is in real need of concentrating on its own organisation for a change. It takes but little thought to see the necessity of this. Each LGBT NGO is driven by a handful of committed people, in some cases just one or two. Without tending to their own base occasionally, given the current scarcity of leaders, there will eventually be nothing left to mount Pride from. This may perhaps be embarrassing, and I doubt that any of the Pride Organizing Committee would feel comfortable saying so in public (which may account for their opaque statements), but there’s no way the community can blame them for this.

Something clearly has to be done if this lapse is not to recur. The Committee seems now to be setting about solving two of the crucial problems that beset Pride at the moment. The first problem is people. There are just not enough committed people yet in Hong Kong prepared to devote time and work to helping run the Parade. The Pride Committee has called a meeting on 7 November to seek views and volunteers. One can only encourage everyone to front up and help. Bringing more people into the Committee’s fold will not be easy. There are so many ideas of what Pride is for and what should be done out there that reaching a consensus will be hard. The Committee is going to have to be ultra-sensitive in being inclusive of as many groups and individuals of differring opinions as they can find if they are to carry the community with them.

The second problem is time. Trying to put an event of this growing magnitude together inside three months is a recipe for a nervous breakdown and it is quite clear that longer is needed. The notice of cancellation given this year was badly short and late fixing of the Pride Parade’s dates in 2008 and 2009 made attracting people from outside Hong Kong difficult. The Committee has grasped this, and aim to have the planning done and the money raised by March 2011 for next year’s Parade. To be effective, the date for 2011 needs fixing soon.

One issue yet to be resolved is finance. It clearly, and rightly, weighs heavily on the Committee’s minds. The entire community, both Chinese and expat, needs enrolling into the effort to raise money. There’s plenty of it out there, particularly in organisations like the Interbank LGBT Forum, which has indicated in the past an interest in helping Pride and can do so without imposing onerous commercial strings. This, though, requires something of a change of mindset in the Committee, for commercial sponsors and donors (and the two are different) need to have their interests reflected, need to present clear budgets to their headquarters to indicate just where their money will go and need to have accounts with receipts presented after the event. Not something that would be too hard to do in this financially savvy city, one would think, but it is something that will need attention if the collection of money is not once again to revert to a few brave souls rattling tins outside Hong Kong’s gay clubs.

Pride will reappear in 2011, and we hope more strongly than before. The dream of the community is to build a Festival around the Pride Parade and the other important elements in the Hong Kong LGBT autumn calendar: the Hong Kong Lesbian and Gay Film Festival, Floatilla and Mr Gay Hong Kong. A joint Approach has already been made to the Government by representatives of all these events and there is hope that it may be possible to get the Festival into the Hong Kong Tourist Board calendar for 2011. The Pride Parade will be central to this, so it is vital that it is not only resurrected but resurrected in ever bigger, more enjoyable and more daring ways as the years roll on.