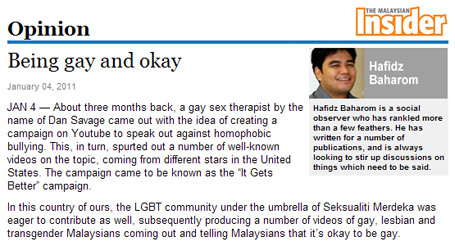 Hafidz Baharom, a Malay-Muslim social commentator comes out as gay in a column in The Malaysian Insider, in support of Azwan Ismail whose appearance in a It Gets Better video sparked furore in the predominantly Muslim country.

Hafidz Baharom wrote in the The Malaysian Insider, an online news portal, on Jan 4, 2011:

I was not threatened or bullied for coming out of the closet since I did it after college. Even then, I did so covertly; at first with my family members i.e. my brothers, my closest cousins, my youngest aunt before finally coming out to my parents and then openly at The Annexe Gallery in 2008, which was mentioned very quietly in The Star [newspaper].

There is no problem being yourself in this nation. However, the government does frown upon your being too loud about it in public.

And that is where we need to change, and that is what I’m fighting for in my own way by talking to politicians from both sides of the divide. We may be a minority. However, we are a minority of Malaysian citizens with the equal right to vote even if we don’t have the right to openly declare our love or preference for members of the same sex.

It does get better, but we need to change the nation for the betterment of everyone regardless of their race, religion, politics and sexual orientation.

And with that, I thank Azwan Ismail for bringing us one step forward towards that goal.