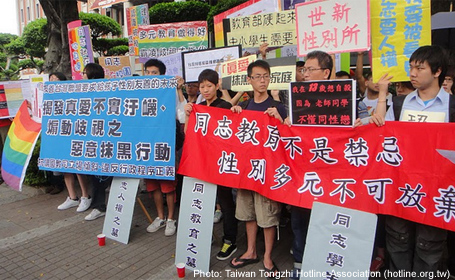 Gender and gay rights advocacy groups on Thursday filed a lawsuit against a group they say is deliberately spreading falsehoods to undermine a new gender equality curriculum originally set to be introduced in schools in September.

Several groups including the Taiwan Gender Equality Education Association (TGEEA) has filed a lawsuit with the Taipei District Prosecutors’ Office on Thursday morning, reported the Taipei Times newspaper. The lawsuit was filed against the Taiwan Union for True Love which gay rights groups say was deliberately spreading falsehoods to undermine a new gender equality curriculum originally set to be introduced in schools in September.

“We are suing a Mr Chi [齊] from the so-called ‘Union for True Love’ because the group has repeatedly spread lies in an effort to undermine the gender equality curriculum,” said Lo Hui-wen (羅惠文), a member of TGEEA in the Times. “We do not know Mr Chi’s real name, because he has never revealed it.”

The TGEEA was joined by members from the Taiwan Tongzhi Hotline Association, the Taiwan Adolescent Association on Sexualities, the Gender/Sexuality Rights Association Taiwan and the Tong-Kwang Light House Presbyterian Church in a demonstration outside the Ministry of Education before heading to the prosecutors’ office.

In Taiwan, gender equality-related courses are currently taught in senior high school in accordance with the Gender Equity Education Act that was passed in 2004. The Act bans gender discrimination in schools in Taiwan, and stipulates that school curricula should include gender equality education.

The MOE says the new directive will allow teachers to introduce the topic in September in elementary and junior high schools, with the aim of teaching children and teenagers to understand and respect diversity in sexual orientation from a younger age.

At a press conference and on Taiwan Tongzhi Hotline Association's website, the groups detailed the false information propagated by the Union for True Love as part of its efforts to undermine the proposed gender equality curriculum as promoting “sexual openness.”

For example, the Union for True Love has claimed the curriculum was teaching children sexual positions and it has said it encourages children to try different types of relationships — even polygamy.

“The curriculum mentions none of those things,” TGEEA secretary-general Lai Yu-mei (賴友梅) said.

The Union for True Love has also deliberately twisted some of actual content of the curriculum, Lai said.

For example, the union has said the curriculum promotes gay marriage, but in fact the part on gay marriage is introduced in a section on different types of families, including single-parent families, transnational families, gay families and adoptive families.

Taiwan Tongzhi Hotline Association board member Goffy told the newspaper that based on his investigative work he believes the Union for True Love comprises members of conservative Christian churches.

“They say they’re opposed to ideas on sex that are ‘too open.’ In fact, they are just anti-gay,” Goffy was quoted as saying. “They launched an online petition against the curriculum, but their demands have been revised several times and only the attacks on homosexuals remain.”