Author and Professor of Anthropology Evelyn Blackwood offers a compelling view how lesbian butch-femme couples in the city of Padang, West Sumatra negotiate their transgressive identities and desires, and how their experiences speak to the struggles of sexual minorities elsewhere in Falling Into The Lesbi World, the fifth volume in the Queer Asia Series.

The brave venture by Hong Kong University Press (HKUP) into the world of queer Asian publishing has (for their readers, and one hopes for the Press) paid off tremendously so far. They have just published the fifth in their Queer Asia series of academic studies. This, Evelyn Blackwood’s Falling into the Lesbi World, is a study of female diversity in the sub-metropolitan world of the port of Padang, which sits on the west coast of the Indonesian island of Sumatra. Blackwood is a professor in the Department of Anthropology in Purdue University in West Lafayette, Indiana, and is a member of the impressive academic board that HKUP has assembled for their series. She has focussed the research she presents in her new book on the small community of women who in various ways love other women in a town that is away from the Indonesian mainstream and so presents diversities distinct from, and perhaps older than, those found nowadays in Jakarta and certainly those found now in the western world. 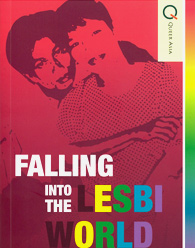 Falling into the Lesbi World: Desire and Difference in Indonesia (HKU Press)

What Blackwood has found in this part of Indonesia seems on the surface to be a manifestation of the ‘butch-femme’ binary that was for a long time seen as a typical lesbian behaviour in Europe and the States but which has, in the last few decades, mostly been submerged there by views (partially of feminist origin) that have rejected the gender stereotyping and conformism of relationships where one side acts as something approximating a man.

In Padang, however, and Blackwood indicates perhaps in other, less altered parts of Indonesian society, couples almost exclusively take the pattern of tombois (the local term) and girlfriends, to the extent that women considering themselves lesbians in the more westernised ways of the capital, or perhaps andros who seek to express their sexual-orientation without fixed gender markers, find it almost impossible to fit in. As do Padang’s tombois when they occasionally venture into the different LGBT culture of the capital. There is a real clash here of both old and new, metropolitan and provincial.

The reasons for this pattern seem, according to Blackwood’s research, to be cultural. I draw two principal themes from her rather dense exposition. Firstly, and very simply, old Sumatran Minangkabau custom (despite its matrilineal roots) and modern Islamic Indonesia both unite to make independent life or even self-expression for a woman almost impossible. To make any same-sex relationship viable, women have to work within the gendered expectations of their society. By behaving in openly masculine fashions, tombois can, to some extent, evade social norms, as can their femme girlfriends, whose public acknowledgement of their situation almost universally is that they are normal women desiring men (for this is what both sides see the tombois to be).

The second explanation is more complex, and has its roots in the historical patterns of behaviour in the islands of what is now Indonesia, where diverse genders and sexual orientations manifested themselves in that mix of transgender, cross-dressing, camp role play and, amongst males, effeminacy that in Indonesia is known as waria. Diverse behaviour was to at least some extent acceptable inside this socially-recognised practice (though there does not seem to have been a similar traditional role for women). One thinks here of the binabae and bakla described in the Philippines by J. Neil C. Garcia in his book Philippine Gay Culture, which formed the third of the Queer Asia series in 2009; there are similar examples from South Asia, Thailand and Malaysia.

Blackwood makes clear her view that it is impossible to draw lines in this cultural approach between sexual orientation and gender as standard western theories would seek to do. Tombois may be female-to-male transgendered people, or they may be lesbians with masculine traits or they may be women seeking to conform to local behaviour. It is not always possible to distinguish and the effect is a behavioural pattern that lies on the border between gender and sexual orientation.

This, from her account, is a persuasive argument. What is less persuasive is Blackwood’s analysis of how the tomboi phenomenon comes about in individual cases. Being an anthropologist, her natural tendency is to explain the facts she is looking at in behavioural terms.

Chapter Three of her book is entitled ‘Learning to be Boys and Girls’. She is, on her own account, also a rather shy interviewer, which seems to have hampered gaining the answers to some of the questions she would have liked (or we would have liked her) to ask. For instance, she does not seem to have anywhere posed the question about attraction to genitalia that springs most obviously to more prurient minds when considering the views of femmes that they are the same as ‘heterosexual’ women attracted to men.

When analysing the origins of tomboi behaviour, she says "I did not ask them why they thought they were boys, nor did the topic come up in their childhood narratives." This seems, to this reviewer, to be at least one reason why Blackwood has found it necessary to explain the origins of the tomboi phenomenon by recourse to theories that the environment that tombois grew up in was largely masculine, that they had problematic family relationships, or that they saw advantages in taking a masculine role and so chose such. Although she admits that: "tombois’ childhood narratives reveal a sense of always being tombois", she cannot resist adding that: ‘the narratives do not at the same time suggest that they were born that way.’ And again: "I argue that the knowledge children have of gender, with its different rewards for masculine and feminine behaviours, moves some females to take up the masculine subject position and its particular rewards."

In other words, this behaviour is both learned and personally selected. I find it difficult to accept this, even based upon Blackwood’s own account. Simon LeVay, in his recent Gay, Straight and the Reason Why: The Science of Sexual Orientation points to a whole range of gender-atypical traits that are almost certainly biologically determined, some of which include or culminate in same-sex attraction.

Some of them are the sort of gender-atypical traits exhibited by the tombois. Whilst, as LeVay admits, these issues are still not fully scientifically determined, the lines of explanation are becoming more and more sure. The fact that the biological sciences are providing greater and greater insight into these areas as time passes is something which anthropologists would do well to recognise. Evelyn Blackwood, it seems, does not.

What is valuable in this book is that it forms another piece in the jigsaw of Asian sexual behaviour which the Queer Asia series is painstakingly putting together. Blackwood shows that cultures in various parts of Asia have dealt with sexual orientation and gender in different ways in the past and continue to do so now. She also shows that there is much in the unique that can be used to illuminate the whole. Culture, in her persuasive account, does indeed change over time.

Falling into the Lesbi World is an exposition of a subject which will be new to almost all its readers and is a valuable addition to the Queer Asia series as a whole.