by Jennifer Chang and Lisa Dazols

The third Shanghai Pride will be held from Oct 22 - 29. Jennifer Chang and Lisa Dazols, a couple who left their San Francisco home in June to travel the world for a year in search of “Supergays” who are creating change for the LGBTQ community, speak with Shanghai Pride organisers Dylan Chen, Charlene Liu and Kenneth Tan.

Jennifer Chang and Lisa Dazols are a couple from San Francisco who embarked on a year-long world tour in June in search of gay people who are creating change for the LGBTQ community. Their project, Out and Around: Stories of a Not-So-Straight Journey, is a collection of their conversations with these “Supergays” around the world. Their trip will cover 15 countries across Asia, Africa, and South America, chosen because those are places where the LGBTQ movement is just starting to take shape, and they want to tell the stories of the people there who are leading the charge. Fridae will republish selected interviews on a regular basis. Readers can follow their journey on www.outandaround.com.

There are no rainbow flags on the streets. There are no decorated floats or banner-raising marches. There are no glossy billboards or commercial sponsorships. In fact, there wasn’t even a set date for this year’s Shanghai PRIDE, China’s one and only LGBT festival, until about a month ago. 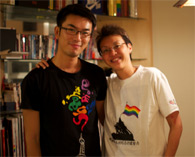 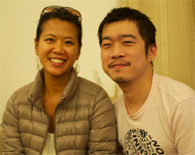 Top pic: China-born Dylan Chen (left) and Malaysia-born Charlene Liu and Singapore-born Kenneth Tan (pictured with Jenni, bottom pic) were members of a yahoo list-serve made up primarily of ex-pat Shanghai residents who came together in 2009 to organize the first Shanghai PRIDE event.

Not publicizing dates and locations until a few weeks (and sometimes days) prior to events is part of the organizing strategy since portions of the first festival in 2009 were closed down by the government. Finding venues willing to take the risk of participating is also a problem, and PRIDE organizers are always wary of last-minute cancellations.

With these limitations, how are these organizers managing to pull off a weeklong festival for a city of 25 million people featuring three parties, nightly film screenings, a speakers panel, a sports day, a pub crawl and a pink picnic? Only with Supergay powers!

Malaysia-born Charlene Liu, China-born Dylan Chen (pictured above), and Singapore-born Kenneth Tan (pictured with Jenni below) were members of a yahoo list-serve made up primarily of ex-pat Shanghai residents who came together in 2009 to organize the first Shanghai PRIDE event. Since then they’ve volunteered countless hours and stretched a shoe-string budget to pull off what other international cities have a year-round full-time staff to do. Charlene says, “When we’re not at our day jobs or sleeping, we’re organizing.”

During our visit in Shanghai, we got a taste of a day in the life of a PRIDE organizer when we followed Charlene around town one evening. She ran over to Dylan’s house to go through her task list, made phone calls to recruit volunteers, and ensured that the press coverage best reflected the festival. She then swung by one of the gay bars to personally ensure their participation for the pub crawl. Getting home around 1am on a work night, we were in awe of this multilingual motivated team of Supergays.

While the first festival was created by ex-pats and primarily attended by the ex-pat community, Charlene, Dylan and Kenneth have ensured that going forward, ownership of PRIDE will shift to the local LGBT community. Charlene explains that in the first few years, locals were quite hesitant of participating for fear of repercussions from the government, “but in the last two years we’ve seen everybody participate.” In fact, several local LGBT groups will be hosting their own events for PRIDE this year.

The yearly festival draws about 3000 participants but reaches many more in both national and international press. Dylan says, “Shanghai Pride tells Chinese people that whether they are in Shanghai or a small town, it is ok to be gay.” The China Daily agreed and called Shanghai PRIDE “an event of profound significance for the country and the world” and “a source of great encouragement to the tens of millions of comrades”. 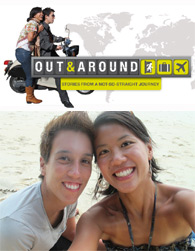 Jennifer Chang and Lisa Dazols are a couple from San Francisco who are travelling around the world for a year interviewing "supergays" and blogging about them on their website www.outandaround.com.

Kenneth says, “When we first put together Shanghai Pride, we were aware of the restrictions we would have to work within. We knew that it wasn’t possible to put together a march or protest for instance. We had to be very clear from day one that this is not a demonstration.” Still organizers knew the importance of a Pride event in China. Kenneth says, “China is home to 40-50 million gays and lesbians, home to the world’s largest gay population. We’re only at the start of something very important.”

Kenneth loves this rapidly changing city where he’s lived for eleven years. He says, “I feel fortunate to be a part of this change. There has been a growing consciousness within the gay and lesbian movement. Now various social media channels have developed that make it easier for us to get the word out about what we do. We have several equivalents of facebook and twitter here. Without channels like these it would be very difficult to put together Shanghai pride.”

The festival now aims to be as inclusive as possible to both the LGBT community and straight allies to celebrate. Dylan says, “Shanghai PRIDE helps us to tell straight people that we exist. It’s an opportunity to show them who we are. In China, the biggest issue are dealing with your parents. It’s the small moments that warm my heart. The first year I had a friend who brought his mom to our Pride event. She was willing to come to learn. The second year we had a panel discussion and a lot of parents came as well. I hope one day my mom can support me like that.”