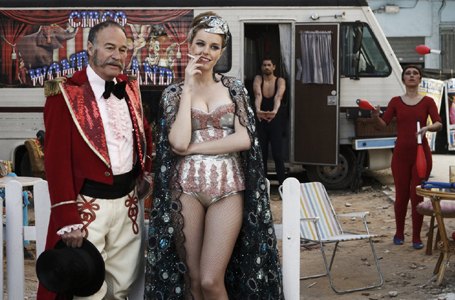 Why so serious indeed? This movie about killer clowns in Fascist Spain rocks. 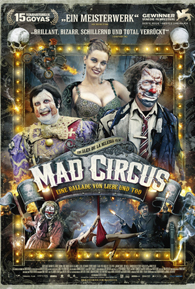 Why So Serious? The seemingly dull and generic English title does not do justice to its premise (not even the Spanish title, Ballada Triste De Trompeta, Sad Ballad of the Trumpet). Rather, to paraphrase the title of another film, this movie should have been titled Killer Klowns from Fascist Spain, that would really have a sold a bundle as it played the midnight circuit and given an irresistible hook it fully deserves to a popcorn audience. There was a time when it was said that every radical filmmaker in Italy wanted to make a Western. In this day and age it seems, every radical filmmaker in Europe would want to make a Grindhouse film, and here is one fine specimen indeed.

An astonishing credits sequence soon follows where images of reactionary politicians (yes, the film wears its politics on its sleeve) are juxtaposed with B-movie images like Raquel Welch from One Million Years BC and Lon Chaney from The Phantom of the Opera is one of the best in years. Then when one of a film's earliest images is a clown in a blonde wig and dress slicing into the throat of a Fascist soldier and erupting a resultant arterial spray, you know a movie can only build up in outrageousness, political agenda and rib tickling fun from thereon. The clown's son, Javier (Carlos Areces) becomes a resistance fighter bent on taking revenge against the Franco regime but on the advice of his father, takes up a job as a 'sad clown' because "he never had a childhood and will never know happiness". A vocation that after 25 years of Francoist prosperity, Javier strangely does take on.

Working in a circus seemingly headed by its ringmaster but where the star and real boss is really the 'happy clown' Sergio (Antonio De La Torre), who is admitted an excellent clown because he is funny and genial with kids. Yet Sergio clearly has an anger management issue. He is a lout who tells violent, tasteless jokes about dead babies and abuses his paramour, the statuesque blonde trapeze artist Natalia (Carolina Bang), who nevertheless still gets off the wild sex he offers in return. No one has dared chastise Sergio mainly because he is the circus' chief moneymaker. Javier likewise falls in love/lust with Natalia, who also courts and flirts with him on the side in part due to the relative sense of security that this pasty, harmless looking geek offers. It's a mistake she's making confusing the inability to act out rage with the inability to harbour it, for the only thing Javier agrees with Sergio on is that they'd both be murderers if they weren't clowns.

The result is a perverse, hilarious and tragic love story where in an escalating series of tragedies for both men. Javier may engage in violence for love, and Sergio in spite of it, but as the film progresses both men are pulled into a vicious cycle of slapstick mayhem paralleling their onstage antics.

By the film's end both men lose their humanity under layers of pancake makeup and scars evoking Christopher Nolan's reimagining of Batman's Joker, becoming more clowns than men. Natalia is fittingly a trapeze artist, vacillating between one and the other till the very end, she never gets what drives her. These are basically three people in a fundamental state of confusion and disarray, reflective of the larger climate where given that the film focuses on the later days of Franco's dictatorship. This is a schizophrenic society where a thin veneer of discipline and order is frequently broken by top to bottom decadence, including the desire for bubblegum pop and risque cabaret acts, alongside a growing insurgent radical movement. Such a society pretty much becomes no better than a circus, and everyone's either a clown engaging in an outburst of violence, or a trapeze artist whoring oneself out in the name of art. It amounts to what George Carlin called 'the freakshow'. Franco as depicted in this movie actually comes off a fairly sympathetic character, that's the extent of its freakishness.

As a lover of cult films and junk culture much like his physical and mental cousins Peter Jackson and Guillermo Del Toro, director Alex De La Iglesia (The Day of the Beast) treats us to a volley of unforgettable imagery amidst superb camerawork and gorgeous cinematography: there is a sequence that feels like Salo lite, hallucinations evoking equal parts Brazil and Fellini, a cabaret called Kojak graced over by the giant visage of Telly Savalas, and anticlerical imagery that would not be out of place in Bunuel or Spaghetti Westerns. Here such imagery tells a story of profound and refreshing cynicism and humour, revealing Iglesia to be a filmmaker of gifts, vision and insight. Then again, why so serious indeed? This is just a movie about killer clowns in Fascist Spain, and it rocks.