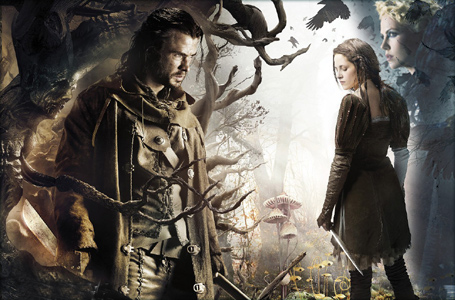 Snow White and the Huntsman

The mirror has spoken: this movie is well in the running for dreariest of them all. 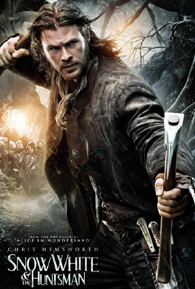 Snow White and the Huntsman is an epic, vast enterprise wasted in the service of a minute and inconsequential story that does not seem to understand or simply steps aside the fears and anxieties that the Grimm fairy tale taps into — to wit, the anxieties that fuel every beautiful woman's thoughts of her own body, and of simply feeling like an old maid by the time one reaches 35 (in our more enlightened times, probably 40) and being passed over for one younger and prettier, be it in one's career, or in one's family life.

Instead, director Rupert Sanders and his screenwriters Evan Daugherty, John Lee Hancock and Hossein Amini come up with an attempt at some kind of epic fantasy good vs evil epic in which the Evil Queen is now Ravenna (Charlize Theron), a vengeance-fuelled evil overlady who wants (in no particular order) to end patriarchy, destroy the world, and attain immortality, and who shares a borderline incestuous relationship with her brother Finn (Sam Spruell). Snow White (Kristen Stewart) is the daughter of the late Queen and King, and Ravenna's stepdaughter, whose father she deposed. After growing up in a tower dungeon, Snow White escapes and enters the dark forest even as the Queen sends the Huntsman (Chris Hemsworth) after her. He is a widower who eventually joins her in the battle to recover the kingdom as she leads the forces of Duke Hammond (Vincent Regan) and his son William (Sam Claflin) in a final battle against Ravenna.

This is a film of big colourless battles, overlong special effects sequences, epic vistas and excessive impotent CGI. Rupert Sanders directs on autopilot and clearly knows what he's doing. Unlike filmmakers such as Terry Gilliam or Guillermo del Toro who have a genuine passion and understanding of the hopes, fears and dreams that fairytales highlight, Sanders and his screenwriters seem to spend time throwing things on screen just because they can and because they're the necessary ingredients of a fantasy film. There's a fairy sanctuary that feels like a cross between Avatar's Pandora and Princess Mononoke's mystical forests of Onin War-era Japan, for example, and so eager to please the crowd are Sanders and his writers that they even throw in a William Wallace-esque speech by Snow White to her troops just before the big battle that is so stiffly worded and that Stewart delivers so awkwardly (the dialogue won't offer her better) that all that's missing is Stewart slapping on some blue war paint.

All potential at human drama is simply lost under the heap of bells and whistles in which the film buries itself. Plot threads and characters are raised and either paid off unsatisfactorily or totally forgotten as the bloated mess of a film burbles and sloughs to its end, derivative to the very last moment. It's tough to remember any performance, even those from such generally captivating mainstay character actors as Ray Winstone, Bob Hoskins and Toby Jones (as three of the dwarves) because the movie's black hole of bland dreary genericness just swallows them up.

Snow White and the Huntsman is a film loaded with ambition but fires them blindfolded. A film whose ambitions scatter all over without really hitting their mark. The mirror has spoken: it's well in the running for dreariest of them all.