Over 350 LGBT business executives (including Fridae Chairman Paul Thompson) and allies from more than 26 countries, representing more than 80 organizations and government agencies, gathered in London to share their best practices and ideas for creating workplaces where LGBT people are safe, accepted, and valued.

The following is a media release by conference organiser Out & Equal Workplace Advocates:

Claudia Brind-Woody, Vice President of IBM addressed attendees, intertwined her personal story with that of IBM's efforts to expand equality globally, and welcomed Harry van Dorenmalen, Chairman of IBM Europe, who elaborated on IBM's work to advance LGBT equality. He reminded attendees, that "the personal is powerful... when you are genuine and sincere, you can have a powerful impact," and urged attendees to "go back to your home village, where you were born, and tell your story." 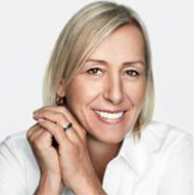 Out lesbian, tennis legend and activist Martina Navratilova
During the Thursday luncheon Dawn Nicholson, Special Commentator, spoke with tennis legend and activist Martina Navratilova about her experience of being openly lesbian. "It all came together-- being out, training, getting a coach-- and then I just started beating everybody. I had some pretty good years there." When asked what the LGBT community can do to raise the bar on equality, Martina commented, "Out & Equal does its part in educating people. The biggest thing we can do is to be out. When we make it personal, it's harder for people be prejudiced." Martina pressed on, "Silence equals consent...go home, and come out to your preacher, come out to your teachers, come out to those at your post office. No one ever wants to go back into the closet once they're out."

The luncheon sponsored by Deutsche Bank included remarks from LGBT Capital founder [and Fridae Chairman], Paul Thompson who described the size and scope of the growing global LGBT market and buying power.

BBC correspondent Jane Hill then led an outstanding panel on how business visibility, through employment practices, advertising, and community engagement, impact LGBT issues globally. Sharon Fraser of Deloitte commented that, "Diversity and inclusion is an absolute business imperative for us." Judy Dlugacz of Olivia rounded out the conversation, "...just because we get our rights does not mean that homophobia is gone...culture doesn't shift as quickly as the laws may," highlighting that changing policy is only one hurdle on the road to equality for LGBT people.

The second and final day of Out & Equal's first-ever Global LGBT Workplace Summit opened with an engaging morning general session co-sponsored by Accenture and Eli Lilly and Company. The session featured remarks from Out & Equal's Founding Executive Director, Selisse Berry, who reminded us that "Once we embrace who we are then it's time to reach out to others and help make the journey an easier one for those who come after us."

Vladi Luxuria, Former MP, Italy, received a standing ovation for her moving remarks, and shared the difficulties of her personal journey, "It was 'normal' for 'normal' people to pity us. If this is 'normal,' I don't want to be 'normal.' I want to be special." She pressed attendees to "Live the one life you have to live - as out and equal."

Michael Cashman, MEP, Chair of the UK Labour Party's National Executive Committee asked attendees to continue pushing corporations to use their influence for promoting LGBT equality, "As activists and politicians, we can never win this alone. We need your global companies to win arguments with governments to change their rules and approaches. Only together can we attain equality and maintain it."

The Friday luncheon sponsored by Ernst & Young included remarks from Robert (Bob) Annibale, who shared that "The role of straight allies has been critical. Jointly, we have a much stronger voice." David Chalmers of Kaleidoscope Trust moderated an outstanding panel on the impact of business and government on the global LGBT community, and led with a powerful reminder, "Changing attitudes is as important as changing the law." Bob Annibale of Citi added that, "Corporations are seen as the citadel, the establishment. There are lots of linkages that need to be established [between activists and corporations.]" Claire Lucas of USAID, deepened the conversation, "Partnerships between corporations and governments are critical to solving problems and promoting equality everywhere." She advocated for governments and corporations entering new markets to empower local organizations to continue their own work, as one strategy for promoting justice and equality abroad.

The 2012 Global LGBT Workplace Summit concluded with a candlelit gala dinner sponsored by IBM and emceed by writer and author Simon Fanshawe, who blended his comedy with the important message of drawing on innovation to energize the LGBT equality movement.

The Accenture & Out Equal Skills to Succeed LGBT Award was then presented by Accenture's Adrian Lajtha to Green Chimneys, a non-profit based in New York City.

John Amaechi, former NBA basketball star, best-selling author and psychologist reminded attendees that even small actions can have a big impact. "The tiny things that we do in our workplace are the most important in reaching our goals. A pathway is illuminated before you, where you believed none existed before." The Pink Singers complimented the program with their beautiful voices and stirring performances. “The last several days have been enlightening, invigorating, and inspiring,” said Selisse Berry, Executive Founding Director, Out & Equal Workplace Advocates. “It is amazing to see the work being done around the world to bring greater equality in the workplace to lesbian, gay, bisexual, and transgender people.”