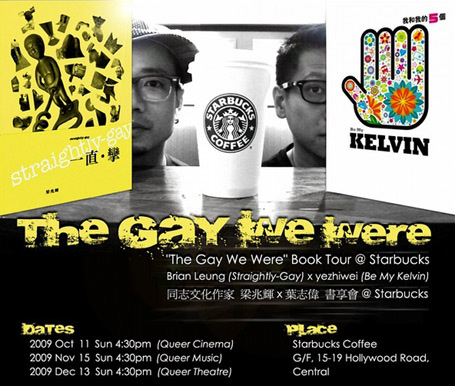 When Yezhiwei’s first Cantonese novel Suddenly Single appeared in Hong Kong in 2003, it was a groundbreaking moment. At last, here was a novel of real gay life that reeked of the Hong Kong streets and vibrated with Canto culture. I call it a Cantonese novel as that’s what it was; written in a Chinese that is only fully explicable to a Hong Konger and then only to those of a generation way younger than mine. It was sassy, very funny, and very swiftly established Yezhiwei’s reputation as the queen of bitchy one-liners, a reputation he’s never lost. Now his creation, Linus, a boy who comes home to find his ‘monogamous’ long-time partner in bed with someone else, is being brought to life on the stage. The Metro-holik Theatre Company will produce Suddenly Single at the Hong Kong Arts Centre by from 13 to 16 September.

Yezhiwei is the nom de plume of Ip Chi Wai, who is now, after some ten years’ writing, a major figure on the Hong Kong gay arts scene. He is a Hong Konger through and through. He grew up here on a public housing estate, came out in the early ‘90s and developed a consuming passion to write, which led straight to the publication of Suddenly Single in June 2003. He became the first contract writer of Kubrick bookshop (which for those who don’t know is next door to the Broadway Cinematique in Kowloon) and Kubrick is now his publisher. He has nine novels to his credit and on top of this has published short stories which have appeared in Dim Sum magazine and in Fe/male Bodies, a Hong Kong compilation. When not attacking the keyboard to do all this, he also writes as a journalist for a range of publications. Suddenly Single, of which he is co-script writer with Pak Li, is his first stage play.

I talked over drinks at Café Gray with Yezhiwei and his lead actor, Sam Choy Chak Man, who will play Linus. I said I thought this was, despite its bitchy humour, a very moral tale about a marriage in all but name. Yezhiwei agreed. “Linus has been married to Jason for seven years and he finds himself out of the flat and on the park bench with his dog. It’s not a break up, really, it’s more like a divorce.”

Despite its surface worldliness, in one of its aspects the play follows the book exactly in being a plea for love and for a steady, faithful relationship. “The danger is,” Sam interjected, “that Linus could seem too naïve, too innocent for 2012, and the modern audience needs to relate to him. So I’ve made him a bit harder than he was in the book. I’ve made him hate Jason for his betrayal at the same time as he still loves him. I think that’s more what’d happen.”

Linus’s story is moving in places too; “I broke down at the point in the script where, after all his betrayals – and he is still betraying Linus when he says this – Jason asks Linus to marry him,” Sam said. 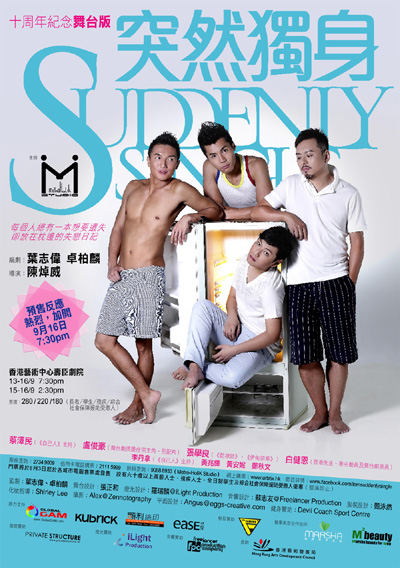 The cast is an experienced and well known one. Jason is played by Lo Chuen Ho, a Hong Kong actor who has won many awards. Their close friends and confidantes, David and Rex, are played by two actors who come from a musical drama background, respectively Rick Cheung and Ronan Pak. All are graduates of the Academy for Performing Arts and in addition are pretty easy on the eye! The director is also an old APA man, Octavian Chan. Sam graduated from APA as recently as 2010, and then took the very courageous step of establishing his own theatre company with friends. This was Metro-holik Studio, a group that has set out to explore the darker, edgier side of theatre and the lives of the minorities in Hong Kong society that are usually hidden from view. Their repertoire has included Pak Li’s Rope of Love, a story of bondage and secrecy, and Lady Samantha, a tale about a male to female transgender. Sam’s also worked for other repertory groups, in shows including On Golden Pond and King Arthur (in which amazingly the youthful Sam played the lead). Recently, he’s become a very well known figure in the LGBT community here as he was recruited to work on RTHK’s LGBT programme, We Are Family, alongside presenter Brian Leung. Sam also tours Hong Kong schools with a drama group bringing LGBT issues to the classroom. On top of all this, he teaches Shakespeare part time to primary school children!

I asked about the differences between writing novels and for the stage. Yezhiwei acknowledged that there were many. “I’ve been learning a totally new kind of writing for this play,” he said. Sam explained that the cast found it necessary to bring a professional actor’s skills to bear to make the transmit the internal monologues of the page visually to an audience. “You have to use body language, pauses, props”, he told me. “You also need more about the supporting characters to make them come alive,” added Yezhiwei.

“In the book you can just mention them or have them present; on stage they have to live.” The production team has also updated the story to 2012, so that now you’ll see Grindr and Jack’d and the music will be from today’s Cantopop scene, though there’ll still be some gay classics by artists like Sandy Lam. The story, though, will not change.

The show’s in Cantonese, so not, sadly, for the linguistically challenged, though for the latter it’ll still be worth seeing with a friend who can interpret. Metro-holik Studio is thinking of taking it abroad, maybe to Taiwan. “Maybe not China, though”, Sam thought. “They’re not quite ready for it there!”