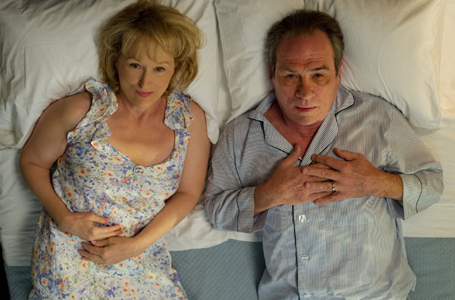 A gentle suburban comedy fueled by a pair of earnest heartfelt performances, including Tommy Lee Jones as never seen before. 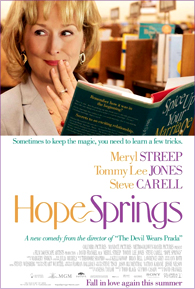 Arnold Soames (Tommy Lee Jones) is a partner in an Omaha, NE law firm, and he and his wife Kay (Meryl Streep) are at that stage of life where they have practically lived the American Dream as advertised. Living in a rich Omaha suburb, they've got their house and cars and all their kids have flown the coop and are either at college or work. At least they're supposed to have some comfortable time together. All would be fine except that such comfort is lapsing into ennui. They haven't had sex in years even to the extent of sleeping in separate beds.

To rescue their flagging (in more ways than one) marriage, Kay decides to seek the help of one Dr Feld, a marriage counselor based across the country in Great Hope Springs, ME. Dr Feld is played by Steve Carell, known for his clueless goofball characters, as a slightly impish, droll and mischievous man all too happy to help with his patients despite his rather fishy methods.

Hope Springs doesn't pretend to be a great film in any aspect, but its primary worth comes from watching to see Kay and Arnold slowly reveal the depths of their characters, Streep as one of today's top actresses is note-perfect as Kay, hitting the exact balance between girlish and mature, but it is Tommy Lee Jones, that perennial tough guy, who truly stuns with a performance of a man unlike others he has played in his long career: Arnold is authoritative but reserved and insular without being charismatic or virile, and Jones' is the performance to watch as an apparently businesslike and dull man slowly reveals parts of the livelier and much more fun young man he once was.

While the film is a comedy about sex it is not a sex comedy: the treatment of the subject matter is mature and adult without being outright raunchy or deliberately offensive, even if more than once the film slides into predictability. The film is so talky that it almost functions as a play in huge sections of it, particularly the counselling sessions between the Soameses and Dr Feld. At the worst these scenes feel padded, but there are moments of tender sadness and heartfelt comedy that pepper Vanessa Taylor's script, such as an ongoing theme of elderly couples buying 'gifts for the house' and the hollowness of these attempts to give late-middle-age marriage a veneer of normalcy. 80s sweetheart Elizabeth Shue has an almost-cameo as a warmhearted bartender, and the soundtrack mostly consists of easy on the ears folk, pop and motown.

Hope Springs is a gentle suburban comedy fueled by a pair of earnest heartfelt performances, especially that of Tommy Lee Jones. Nothing more, nothing less.