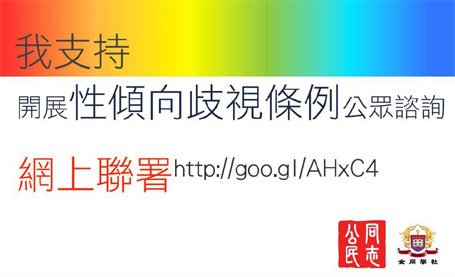 Legislative Council (LegCo) member Cyd Ho Sau-lan is planning to move a motion on Wednesday, Nov 7, to urge the Government to conduct a public consultation on legislation to ban discrimination on the basis of sexual orientation.

Update (Nov 7, 2012): Although a majority of geographical constituency (GCs) members voted in favour (21 for and 8 against with 4 abstentions), the motion was defeated today as it failed to gain the support of functional constituency legislators (10 for and 17 against with 8 abstentions). There are 29 FCs in the Legislative Council, representing various sectors of the community which are considered playing a crucial role in the development of Hong Kong.

As early as 2000, the Legislative Council (LegCo) had formed a subcommittee to study discrimination in the areas of housing, medical services and employment faced by LGBTs in Hong Kong. LegCo member Cyd Ho Sau-lan (何秀兰) was the chairman of the subcommittee then. 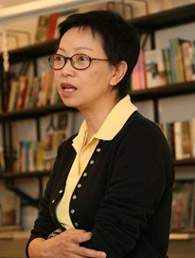 Ho continues to push for laws to protect people from discrimination based on sexual orientation. She is expected to move a motion on equal rights for people of different sexual orientations at 11am, Wednesday (Nov 7), at a session where Members will debate a motion on perfecting housing policy and resolving public housing need.

According to a press release issued on behalf of the LegCo Secretariat, Ho's motion states: "That this Council urges the Government to expeditiously launch public consultation on enacting legislation to safeguard equal opportunities for and the basic rights of people of different sexual orientations."

Nutong Xueshe (女同學社), a LGBT rights advocacy group has set up a petition to support Ho in her latest bid and to call on the government to to carry out public consultations.

On November 7, Legislator Cyd Ho will move a motion urging the Government to conduct public consultation on legislation to ban discrimination on the basis of sexual orientation. Despite the growing acceptance of LGB citizens among fellow Hong Kongers, discrimination is still rampant (see note).

Equality and diversity are part of the ethos of a cosmopolitan Hong Kong. Almost 80 countries around the world have passed similar laws. The United Nations have repeatedly urged governments to legislate to protect communities of different sexual orientations. We think the time to conduct public consultation is long overdue.

Some faith groups are petitioning against any consultation to take place, claiming that legislation will trespass their “right” to condemn homosexuality or hinder their research on the spread of HIV/AIDS. The freedoms of speech and religion are safeguarded by the Basic Law and the Bill of Rights. The Sexual Orientation Discrimination Ordinance cannot contravene the Basic Law and the civil and political rights contained therein.

Hong Kong has already passed four anti-discrimination statutes and their constitutionality has been upheld in the courts. Any complaints on violating freedom of speech due to these laws in force is unheard of.

Faith groups’ concerns and consternation are understandable. Dialogues and debates give rise to a clearer picture and consensus. For this very reason, public consultation is such an opportunity for the citizenry to express their diverse opinions and arrive at something agreeable to most.

We invite organisations holding different notions on homosexuality not to be blinded by their prejudice and participate in the consultation in good faith, rather than stopping any public discourse from ever happening.

Public consultations serve the purpose of improving the statute and help turning Hong Kong into a diverse society that it deserves. We urge lawmakers to pass this motion and the Government to carry out public consultations.