Editors Audrey Yue and Jun Zubillaga-Pow have curated a solid collection of essays looking at LGBT Singapore from multiple perspectives, examining in particular the coexistence in the nation of institutionalised repression and tolerance of the gay community.

For a long time, us LGBT Singaporeans have been hungry for information about ourselves. This is why non-fiction books about us have sold so well: Joseph Lo and Huang Guo Qin’s People Like Us: Sexual Minorities in Singapore (2003), my SQ21: Singapore Queers in the 21st Century (2006) and Ng King Kang’s Born This Way But… (2008). 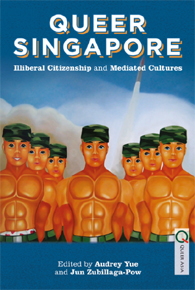 It’s therefore a cause for celebration that Hong Kong University Press has finally published a volume on our city-state in its acclaimed Queer Asia series. I’ve been showing off my copy of Queer Singapore all week, and on at least two occasions random gay acquaintances have eagerly pulled the book from my hands and asked me where it’s on sale.

Having finished the book, I’m pleased to report that it’s solid stuff. I’d even venture to say it’s the most comprehensive non-fiction title to have emerged on this subject so far, examining our culture through the perspectives of anthropology, sociology, law, political science, history, film studies and queer theory. In addition, the vast bulk of twelve essays are in fact written by Singapore citizens, which means that we can regard this as an insider’s take on our identity rather than a foreign interpretation.

Casual readers deserve a word of warning before they begin, and it’s this: Do not be scared off by the editors. Non-academics might be well advised to skip or skim Audrey Yue’s introductory essay, as it’s packed so densely with the language of theory that one necessarily makes very slow progress through its pages. (Likewise, Jun Zubillaga-Pow’s “The Negative Dialectics of Homonationalism, or Singapore English Newspapers and Queer World-Making” is such a difficult meta-analysis that it may be best left to hardcore poststructuralists to enjoy.)

The individual chapters of the book are by and large accessible and informative (though there are exceptions to the rule). I’ll list four favourites among the pack:

1) Simon Obendorf provides a strong, detailed summation of the Singapore government’s contradictory stance towards gay men in “Both Contagion and Cure: Queer Politics in the Global City-State”.

3) Shawna Tang’s “Transnational Lesbian Identities: Lessons from Singapore?” makes a convincing argument that Singaporean lesbians have developed a distinct set of cultural norms – techniques for negotiating society and individual desire that are quite clearly not borrowed wholesale from the West.

4) Roy Tan’s “Photo Essay: A Brief History of Early Gay Venues in Singapore” gives us an invaluable insight into the architectural and emotional landscapes of pre-Internet gay Singapore: cruising spots, clubs and saunas from the ‘50s to the 2000s. This is especially meaningful to younger LGBT folk who feel rootless in the ever-changing city. It’s an affirmation that we, too, have a heritage on this island that’s worth remembering.

These diverse threads are tied together by the theme of “illiberal pragmatics”: editor Yue’s descriptive term for the authorities’ ambivalent attitude towards its gay community: neither non-liberal nor neoliberal, neither rational nor irrational, supporting officially institutionalised LGBT repression while tolerating, even encouraging, a vibrant gay scene. Gay men and lesbians thrive in this strange environment through their sheer commitment to “doing gay” and “doing butch”, strengthening the community simply by engaging in their cultural practices of gymming, breast-binding and partying hard.

Yue’s closing essay in fact uses Fridae as an exemplar of her theory. It is, after all, a commercial enterprise that rides the government’s desire for globalised creative gay dollar, but which is simultaneously committed to the promotion of LGBT rights.

Queer Singapore is a remarkably coherent collection: one gets the sense that many of the authors are familiar with one another’s work, and are thus engaging in a mutual dialogue through their writing. There are, however, some obvious shortcomings, and they must be addressed.

The first problem is scope. Though deliberate efforts have been taken to ensure the inclusion of gay women as well as gay men in the volume, scant mention is made of the historically important transgender community, let alone the elusive non-community of bisexuals. One also wonders if more attention should have been paid to Singapore’s ethnic diversity. Robert Philips’s essay “Singaporean by birth, Singaporean by faith” is a vitally important look at gay Indian men here, but almost no mention is made of Malay queers of either gender.

Second, it’s surprising how dated the book is. Michael Hor’s otherwise commendable “Enforcement of 377A” lacks any mention of the ongoing constitutional challenge to Singapore’s anti-sodomy law, led by lawyer M. Ravi and defendant Ivan Tan Eng Hong since 2011. Furthermore, there is only a cursory mention of the phenomenon of the Pink Dot rallies, despite their importance in Singapore and beyond as non-confrontational alternatives to the gay pride march.

Nevertheless, these are mere quibbles in the light of this book’s accomplishment. For the first time, it formalises a framework for queer Singapore studies through a medley of voices on the subject, all in support of the model theory of illiberal pragmatics.

I expect many scholars to reference this text in the coming years, just as I foresee further volumes, updating and deepening the field of studies that Yue and Zubillaga-Pow have drawn out. May we never lose the hunger to know what they have to say.