Personally knowing gay men and lesbians – more than seeing gay characters in films and TV shows – has shown to increase positive attitudes and affect acceptance of gay men and lesbians. The results also show a small but significant trend toward greater tolerance of homosexuals in Singapore.

Attitudes of Singaporeans and permanent residents toward gays and lesbians – although “sharply polarised and predominantly negative” – have become a little more favourable, according to researchers from the Wee Kim Wee School of Communication and Information at Singapore’s Nanyang Technological University (NTU). 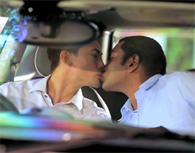 The nationally representative study conducted in 2010 surveyed 959 Singaporeans and permanent residents aged 18 or older. It was a continuation of a similar survey conducted in 2005. The study was published in the Asian Journal of Social Psychology in December 2012.

When results from both surveys were compared, Singaporeans' attitudes towards homosexuals appear to have shifted more positively.

In 2005, 68.6 percent of respondents expressed negative attitudes, 22.9 percent had positive attitudes and 8.5 percent were neutral.

In 2010, 64.5 percent of those surveyed held negative attitudes towards homosexuals, while 25.3 percent expressed positive attitudes and 10.2 percent were neutral.

"Taken together, the results show a small but significant trend toward greater tolerance of homosexuals,” said lead researcher Professor Benjamin Detenber in a press release.

“Clearly, public opinion is still highly polarised on this issue, but slightly more people are sharing the middle ground in 2010 compared to 2005,” he said.

Survey items
Attitudes toward lesbians and gay men
1. Sex between two men is just plain wrong.
2. You think male homosexuals are disgusting.
3. Male homosexuality is a natural expression of sexuality in men.
4. Sex between two women is just plain wrong.
5. You think lesbians are disgusting.
6. Female homosexuality is a natural expression of sexuality in women.
Acceptance of homosexuals
To what degree would you accept or not accept:
1. A homosexual co-worker.
2. A homosexual teacher.
3. A homosexual friend.
4. A homosexual neighbour.
5. A homosexual family member.
The study found that older people tend to have more negative attitudes towards lesbians and gays, as do those with lower levels of education and income. On the other hand, people who feel it is less important to conform to social norms and those with a more Western cultural orientation tend to have less negative attitudes and be more accepting of homosexuals.

As the attitude items came from the Attitudes Toward Lesbians and Gay Men (ATLG) Scale, a well established composite measure, respondents were not asked about section 377A, a law which criminalises sexual relations between men in Singapore.

As was the case in 2005, the 2010 study found that religion is significantly related to attitudes and acceptance. Among the religious groups, freethinkers were the most positive in their attitudes – significantly higher than Christians, Buddhists and Muslims. Irrespective of specific religion, people who are more intrinsically religious – i.e. people who say that religion is integral to their lives – are more likely to have negative attitudes towards homosexuals and are less accepting of them.

Interestingly while Christians had the second lowest ATLG (attitudes) scores, they were more accepting of gay men and lesbians than Buddhists and Muslims.

The study noted that it is possible for people to hold negative attitudes towards homosexuals but accept gay men and lesbians on a more personal level, whether as co-workers or friends, regardless of whether they perceive homosexuality to be a choice. The researchers suggested that the precise reasons for this could be the subject of future research.

Gay characters in the mass media

Those who had higher interpersonal contact with gay men and lesbians and watched more films and television shows with gay characters were also likely to express more positive attitudes toward gays and lesbians, and to show greater acceptance.

The researchers suggested this could be because of the positive correlation between interpersonal contact and media exposure to homosexuals in this sample of Singaporean adults. Alternatively, it could be due to the way in which exposure to homosexuals in the media has been measured. The 2010 study used the total number of films and TV programmes watched, whereas other studies used viewing frequency and scale measurements of para-social relationships between viewers and media characters.

Similar to studies conducted elsewhere, the survey found that Singapore citizens and permanent residents who have a gay or lesbian family member or know someone who is gay are less likely to have negative attitudes and be more accepting.

As with other studies, the Singapore survey shows that interpersonal contact appears to have a bigger influence in shaping attitudes and acceptance of homosexuals than mediated exposure to gay characters – i.e. seeing gays and lesbians in films and television programmes – which also predicted less negative attitudes and greater acceptance.

The research team is planning to conduct a similar survey in 2015.