A pastor of a megachurch in Singapore has called on his congregation – with a visiting former Prime Minister in the audience – to lobby the government to retain a colonial-era law which criminalises sex between men.

A pastor of a megachurch in Singapore has reignited calls for Christians to lobby the government to retain a colonial-era law which criminalises sex between men. 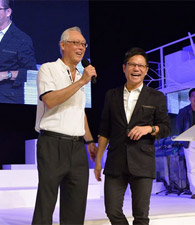 Emeritus Senior Minister Goh Chok Tong (left) with Faith Community Baptist Church founding pastor Lawrence Khong on stage during a church service on Jan 13. A press release and 14 photos of the visit were posted on the church's website this week.

In a press statement posted on the Faith Community Baptist Church’s website to highlight former Prime Minister Goh Chok Tong’s visit to the church on Jan 13, founding pastor Lawrence Khong told his congregation with Goh in the audience that his church members are committed to “build strong families in Singapore” and by their definition the family unit “comprises a man as Father, a woman as Mother, and Children.”

The Emeritus Senior Minister is a long-time MP for the Marine Parade district where the church’s Touch Centre auditorium is located. The visit is said to be part of the minister’s walkabout to meet with constituents in the area. Goh was also the guest-of-honour at the launch of the Marine Parade Christmas light-up last year which cost the church over S$300,000, as revealed by Khong during a recent church service.

Khong warned that they “see a looming threat to this basic building block by homosexual activists seeking to repeal Section 377A of the Penal Code.”

The statement by the church noted: “Reverend Khong used the opportunity to highlight to Mr Goh that homosexual activists have been increasingly stepping up to challenge this framework, especially in their efforts to repeal Section 377A of the Penal Code – a move detrimental to family and family ties.”

The Singapore High Court is scheduled to hear two cases in which three petitioners are challenging the constitutionality of the long-standing law on Jan 25 and Feb 14 respectively.

Without citing any examples or evidence, the 60-year-old pastor who is also professional magician, said that “examples from around the world have shown that the repeal of similar laws have led to negative social changes, especially the breakdown of the family as a basic building block and foundation of the society.”

Using textbook anti-gay arguments popular among Christian right groups in the United States, he warned that repealing the law will “take away the rights of parents over what their children are taught in schools, especially sex education.”

“It attacks religious freedom and eventually denies free speech to those who, because of their moral convictions, uphold a different view from that championed by increasingly aggressive homosexual activists,” he told his congregation that appears to number at least in the hundreds although the church claims to have a membership of 10,000.

He then called on the government to “provide moral leadership in preserving this basic building block and foundation of our society” and to “robustly protect our constitutional rights to free speech and religious liberty.”

The press statement concluded by quoting the former PM as having responded to Reverend Khong “with a strong word of encouragement and who said, ‘You stand by your belief, and you'll be fine!’”

When contacted by Fridae today, Emeritus Senior Minister Goh's office clarified that the minister's comments at the church service “was a general remark that people are free to stand by their beliefs”. His office declined to comment on the minister’s position on section 377A when asked.

In 2003, the then PM said in an interview with Time magazine's Asia edition that gay people are now allowed to work in "certain positions in government". His comments that gay people “are born that way but they are like you and me" made international headlines as it was read by many as a signal of a new more tolerant stance by the government. Church leaders and Christians swiftly and fiercely protested the hiring of gay men and lesbians in the civil service, and called for the continued criminalisation of sexual relations between men and the quelling of the gay rights movement in Singapore.

Meanwhile the pastor’s Facebook profile on which he posted his statement about Goh’s visit has attracted more than 200 ‘shares’ and ‘comments’. The number of pro-gay comments outnumbers anti-gay ones and have garnered overwhelmingly more ‘likes’.