On top of the world: Arthur Tam

Arthur Tam is on a roll, a man set within a short time (if he isn’t already) to be the most well-connected gay man in Hong Kong. His face is everywhere in the Hong Kong gay scene, in every publication, at every party and somewhere in every event. People come up to him on the street to say ‘hello’ and ‘thank you’. He now knows everyone, and has interviewed most of them. He has even scraped down the barrel of the C/D list to talk to me on his show. So it’s time Fridae got around to introducing Arthur to the wider world. 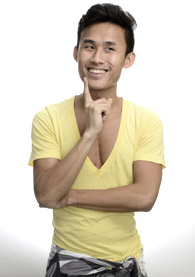 Arthur Tam, columnist for Time Out Hong Kong and presenter of the new RTHK Radio 3 English-language LGBT show, From Top to Bottom.

By way of introduction, Arthur is a Californian, born in Rancho Palos Verdes (a town in the LA conurbation) to Hong Kong Chinese parents who emigrated young to the States, settled and did well for their family. Youngest of a family of three siblings, he studied criminology at the University of California, Irvine.

“Both places are kind of suburban”, he told me, “and after that I really wanted to get away, so I came to Asia and studied Mandarin in Beijing for six months in 2005.” He went back to LA to work, starting out in design (the second most recognisable thing about Arthur is his hats, which are eccentric and always a surprise; I guess that they may derive from this part of his career). He still had itchy feet, though, and soon headed back to Asia, this time to seek his fortune in a singing competition, Canto TV’s The Voice (no relation to the US TV show). I should mention here that Arthur has a very sweet voice and was a great draw at Volume HEAT one Christmas ago when he sang Christmas songs accompanied by Ashford Pritchard on the guitar.

The audiences of TVB, though, did not think he had ‘the voice’, so he found himself looking for a job. This was 4 June 2011, he was 26, and he wasn’t sure still what he wanted to do.

“I’m disorganised, a scatter brain”, he told me self-deprecatingly, but on this occasion luck proved his lady. An internship seemed a good idea, and just then Time Out was getting really established in Hong Kong and were looking for an intern to write their regular LGBT page. Arthur, being evidently gay, out and proud and sociable, not to mention being bright, bouncy and nice with it, was taken on straight away, and he’s been writing the page ever since.

He’s been an amazing success as a journalist. Time Out gave him free rein to look out stories and track down people to interview, and he has ridden the wave as Hong Kong warms up to everything gay. He has covered all the social and political changes that are happening here, and has bagged people like Canto-stars Anthony Wong and Denise Ho (after they came out), local legislator Ray Chan (after he was elected as Hong Kong’ s first gay Legco Member), film directors, sportsmen and socialites. Time Out fast learned he had many talents. He had design training, so they have used him as a stylist. He can write, so they’ve let him loose on the style and clubbing sections of the magazine too. 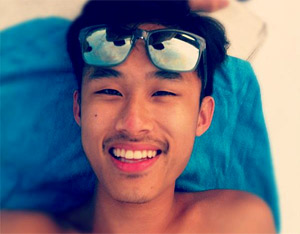 In addition to having a huge amount of fun with all this, Arthur has become a seriously influential voice for gay rights in Hong Kong. In late 2012, it was both these aspects that attracted RTHK’s Hugh Chiverton to offer him a slot as presenter of a new English-language radio show on Radio 3. RTHK has, for some years, had a Cantonese show, hosted by DJ Bling, Brian Leung, which goes out at midnight on Saturday’s, nowadays with actor Sam Choy alongside Brian. Till this, though, RTHK had not delved into an English audience on anything much LGBT.

Now, a new pre-recorded English show was begun, presented for an hour each week by Arthur and produced by Phil Whelan, a great ally of the LGBT community and for a long time Musical Director of the Hong Kong Singers (Phil will be remembered by many here for his role as compère in the 2011 Mr Gay Hong Kong Finale). The show was called From Top to Bottom and hit the air on 12 October last year. Since then, there have been over a dozen programmes broadcast.

Arthur has already covered a wide range of topics on the show. There’ve been drag queens (La Chiquitta and Coco), the religious, or rather ex-religious (Bridge, the ex-Mormon), another talk show host (Andrew Shuen), a magazine editor (Joe Lam of Dimsum) and many more. You can hear the full list at the links below. Weeks back, there was even myself, out-glamoured and out-talked by Mr Gay Hong Kong impresario and Asia’s Most Hyperactive Gay Boy, James Gannaban.

The show’s reach is wide, though not really quantifiable, as it goes out on air then on the net. Arthur’s parents listen to it in California and have taken to telling their friends their son is a radio presenter. So he’s listened to pretty much all around the world already.

“I can take the show where I want to, basically,” Arthur tells me. “I get to choose the topics and people. I am pushing the envelope, too, in what we talk about. They want the show to be listened to by all sorts of people, not just gay men, but they are good at letting me speak freely on subjects that might shock.”

Readers might recall my opening remarks about Arthur’s conversation in the FCC; that subject may or may not appear. Check into the show and find out!