Lawmakers in Uruguay on Wednesday voted 71-21 to legalise same-sex marriage, making the South American country the 12th in the world and third in the Americas to do so.

Uruguay's move came after its neighbour Argentina approved gay marriage in 2010. Same-sex marriage has been permitted in Mexico City, but not the rest of the country, since 2009. 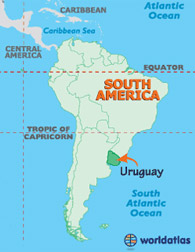 The Washington Post notes that "whereas some other countries have carved out new territory for gay and lesbian couples without affecting heterosexual marrieds, Uruguay is creating a single set of rules for all people, gay or straight. Instead of the words 'husband and wife' in marriage contracts, it refers to the gender-neutral 'contracting parties.'"

All couples can adopt, or undergo in-vitro fertilisation procedures, and decide which parent's surname comes first when they name their children.

The new law is expected to take effect 90 days after its enactment.