As public hearings are underway before the bill will be proposed to parliament for debate, the English-language local media appears to be covering the issue positively with interviews with same-sex couples who speak about the discrimination they currently face and their hopes for the future.

In February, Asia City’s BK Magazine profiled four couples in a Valentine’s Day feature titled “Gay marriage in Thailand: What LGBTS want” while The Nation newspaper reported on February 15 that same-sex couples who tried to register their partnership at district offices on Valentine's Day were turned away as the law didn’t allow for same-sex partnerships or marriage. 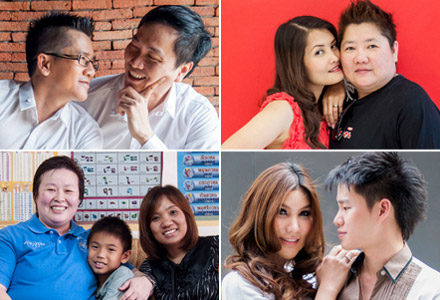 Members of the Sexual Diversity Network were also at the venue to call for legalisation of same-sex marriage as not being able to do so would mean that one would be denied legal rights such as family health insurance and inheritance rights.

Anjaree Foundation founder Anjana Suvarnnanond was quoting as saying that many same-sex couples took care of each other and lived together for life, but their unions weren't recognised by law.

"We have to keep providing information to the public," said Chumaporn Tangkliang, a key member of the network, which represents lesbian, gay, bisexual and transgender (LGBT) people. Chumaporn added that as the media continues to portray LGBT people as abnormal, the issue needs to be confronted and rectified.

Under the headline “Legalising love," the Bangkok Post on March 26 featured four couples who shared their challenges and expectations regarding the proposed same-sex marriage law. 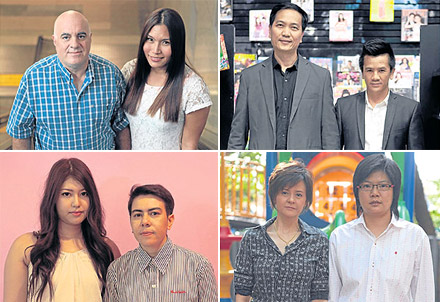 It further noted: “Thailand has long been perceived as a country with a tolerant attitude towards gender diversity. The kingdom is sometimes dubbed the "gay capital" of Southeast Asia, but that refers to the social aspect of the issue rather than the legal side: when it comes to anti-discrimination legislation, gay rights in Thailand are barely protected or recognised.”

The Thai government last year formed a committee which has since drafted a civil partnership law for same-sex couples but Chumaporn said there were details that the network disagreed with, such as the need to have a psychological examination before a couple is allowed to marry.

While both news stories feature couples in which one party identifies somewhere on the transgender spectrum, transgenders in Thailand are unable to change their birth gender and may find that a same-sex civil union will afford them rights as a couple.

"Although I consider our relationship as an 'opposite-sex' couple, I don't mind if you call us a same-sex couple. After all, we now live in a democratic country; I believe it is a basic right for people of all sexual orientations to be protected by the law, especially their partnership," said Parit Chomchuen, a trans-man (female to male) activist at Anjaree, Bangkok's lesbian feminist group, in the Bangkok Post.

On April 9, The Nation ran an interview with LGBT rights activist Chumaporn who clarified commonly held misconceptions about same-sex partnerships and how the bill, if passed, will effect heterosexuals: "You do not lose anything if you are not lesbian, gay, bisexual and transgender [LGBT]. But if your child or your friends are LGBT, they will have their rights protected under the new law."

Five rounds of public hearings have been organised by the Rights and Liberties Protection Department and the parliamentary committee on Legal Affairs, Justice and Human Rights in Bangkok, Chiang Mai, Songkhla and Khon Kaen and with the last to be held in the capital on April 19. Some 150 to 250 people showed up to voice ideas and offer feedback during each hearing, reported the Bangkok Post.

The thrust of the bill is for the Ministry of the Interior to recognise civil partnerships for same-sex couples. Under the proposed bill, same-sex couples will be officially recognised as "civil partners" and will confer rights related to the sharing their assets and property; the right to represent their partners in criminal cases; tax benefits; and healthcare and insurance benefits.

Opinions gathered from the hearings may be used to amend the bill before it goes to the cabinet for further consideration.

If the bill is passed, Thailand will be the first in Asia to recognise same-sex civil unions.


A PSA about how same-sex couples in Thailand are discriminated
against as they are prohibited by law from having legally
recognised partnerships, in Thai with English subtitles