New Zealand has become the first country in the Asia Pacific region and the 13th worldwide to legalise same-sex marriage after its parliament voted 77 to 44 on Wednesday night.

New Zealand's parliament has voted 77 to 44 to approve the Marriage Equality Bill on its third and final reading on Wednesday night.

MPs and those in the public gallery broke into applause after the results was announced after a two-hour debate. They then broke into song singing the New Zealand love song "Pokarekare Ana" in the indigenous Maori language as those opposed to the bill quietly left the public gallery. 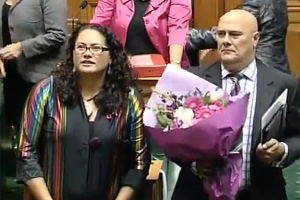 The bill was sponsored by opposition Labour MP Louisa Wall. MPs were allowed a conscience vote on the bill and did not have to vote along party lines.

"Excluding a group in society from marriage is oppressive and unacceptable. Today we're embarrassed and appalled by these examples. And in every instance it was action by the state. This is not about church teachings or philosophy. It never has been.

"It's about the State excluding people from the institution of marriage because of their sex, sexual orientation or gender identity. And that's no different from the actions taken in these historical examples."


ACT leader John Banks, who as a former National MP was a leading opponent
of decriminalising homosexuality in the 1980s, admitted his views
had changed since he described the 1986 Homosexual Law Reform bill as
evil and sickening.  After "three decades, and ten Parliaments, I have had
time to reflect", he told Parliament.  "To reflect on what I said, and what I did.
"If I knew then, what I have learned since, I would have acted differently."
Source: The Southland Times (Stuff.co.nz)