Be part of IDAHO events this weekend in Australia, Cambodia, Hong Kong, Vietnam, Thailand, and Singapore. Visit the newly launched IDAHO website and find out what's going on near you.

Created in 2004 to draw the attention of policy makers, opinion leaders, social movements, public opinion, the media to this issue; and to promote a world of tolerance, respect and freedom regardless of people’s sexual orientation or gender identity, the International Day Against Homophobia and Transphobia (IDAHO) is today commemorated on May 17 in some 70 countries around the world. 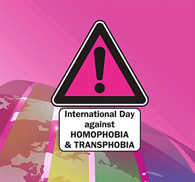 As much as it is a day against violence and oppression, it is a day for freedom, diversity and acceptance. The date of May 17th was chosen to commemorate the decision taken by the World Health Organization in 1990 to take homosexuality out of the list of mental disorders.

Here is a list of events in the Asia-Pacific region, for updates visit dayagainsthomophobia.org

Cambodia (May 16-19)
May 16: Coming Out because we are not wrong!- workshop - Khmer language
May 17: IDAHO – The beginnings of accepting LGBT rights – A workshop featuring local authorities, police and human rights lawyers who support LGBT rights
May 18: Learning to protect ourselves from rights violations
May 19: Pride Community Day: Blessing ceremony, Sports Day and an evening concert of LGBT performances.
See details here.

Thailand
Thai Transgender Alliance (TGA) and Thailand’s National Human Rights Commission (NHRC) will organise a one day IDAHOT event on May 17 at the NHRC office. The panel discussion will cover several topics, for instance, global movement on IDAHOT, the result of the workshop with Miss Tiffany, the results dissemination of the project on “Trans Rights Watch for Military Recruitment” conducted by Thai TGA.

The project has been continued to follow up with the implementation of Ministry of Defense that has exempted Thai transwomen from the military services, but the paper used to be written as “mental disorder”, or “sexual deviance”. Since last year, the new term has been introduced as “GID”. However we have translated into Thai language as “Gender is incompatible with sex at birth”.

ICS, the largest LGBT organisation in Vietnam, has organised a wide range of activities. Click here for more details.

Meanwhile in South Korea, the Korean Gay Men’s Human Rights Group Chingusai on May 13 released on Youtube the 2013 IDAHO Project “One Fine Day,” a video recording of over 100 ordinary citizens singing together to support LGBT rights, in the belief that violence against minorities cannot be condoned any more and must stop now, according to a press statement. "The recording was made to ring an alarm bell to the prejudice discrimination against sexual minorities in South Korean society and to commemorate the International Day against Homophobia and Transphobia (IDAHO), which falls on May 17 each year. 'You Make Me Proud,' the song performed on the video, was created by the Sydney Gay and Lesbian Choir as a part of the Out Post Choir Project in 2012 to commemorate the IDAHO. It conveys the conviction that, just as LGBT people affirm and recover their lives and selves despite countless challenges and hardships, all people can overcome injustices in reality and become friends, which will lead to greater love."

76 countries still criminalize consensual same-sex relationships and lesbian, gay, bisexual and transgender people everywhere continue to suffer violent attacks and discriminatory treatment. In this simple, high-impact video from the UN human rights office, individuals from diverse backgrounds pose questions directly to the viewer designed to expose the nature of human rights violations suffered by LGBT people around the world. The video includes cameo appearances by UN Secretary-General and High Commissioner for Human Rights Navi Pillay. The UN's message: LGBT rights are human rights. Together we will build a world that is free and equal.