Dozens of Italian lawmakers locked lips in support of a measure to prevent anti-LGBTQ discrimination during a parliamentary debate last week.

Dozens of lawmakers from the Five Star Movement (M5S), a political party in Italy, staged a kissing protest in parliament during a debate last week on an anti-homophobia bill, calling for more rights for gay people. The "five stars" are a reference to five key issues: public water, sustainable transport, development, connectivity, and environmentalism.

M5S MP Federica Daga tweeted a photo of the protest and said (in Italian), “Equal rights and dignity without gender. Because a kiss and a hug are not scary.” 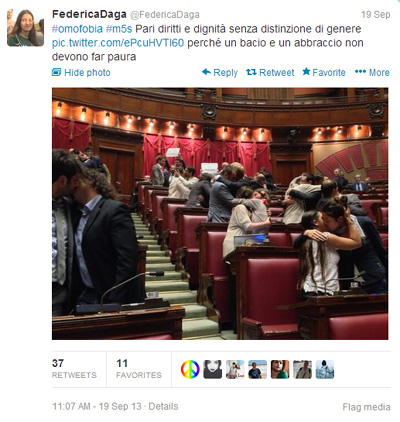 M5S politicians interrupted the debate on Thursday by simultaneously rising from their seats and kissing their colleague next to them in a display of solidarity while other members of the party held signs that called for "more rights" for LGBT individuals, as seen in the video.

The bill was passed on Thursday by the lower house and aims to see a 1993 anti-discrimination law extended to crimes motivated by homophobia or transphobia. A total of 354 politicians voted in favour of the bill and 79 against, La Repubblica reported.

The measure passed the lower house, but is expected to fail in the Senate, according to The Local, an English-language Italian news site.

The Local reported that the parliamentary debate on the anti-homophobia bill started in July, but was halted for the summer recess. During the break a 14-year-old boy committed suicide over anti-gay bullying, prompting Laura Boldrini, speaker of the lower house, to call for a new law to tackle homophobia.