The Hong Kong government is said to have conducted its own surveys in 2012, which found that a majority of respondents support having a law against discrimination on grounds of sexual orientation, though the results of the survey remain a secret. Fridae's Hong Kong correspondent Nigel Collett outlines what's stopping the government from implementing anti-discrimination laws to protect LGBTs.

Hong Kong is a secular society proud of the equality enshrined in its Basic Law and legal system. Its population is educated and sophisticated. It is one of the most civilized places in the world to live.

Yet in one area, none of this is so. If you are one of the estimated 5 percent (about 300,000 people) whose sexual orientation or gender identity is different from that of the majority, you can expect to live a life marred by prejudice. True, no one gets tied to a fence and beaten to death here for being gay, but the harm discrimination does is real, even if it takes less extreme forms.

In 2012, NGO Community Business carried out the most thorough survey of public opinion on this issue to date. It found that 85 percent of the general public felt that Hong Kong needed to be more inclusive. 80 percent believed that LGBT (Lesbian, Gay, Bisexual and Transgender) individuals needed to be treated more fairly at work. Of those individuals polled who self-identified as LGBT, 77 percent said they had been treated disrespectfully at work and 40 percent claimed their careers had suffered. To avoid this, 71 percent confessed that they had been forced to lie about their sexual orientation.

LGBT people are forced to hide in the closet. The effect of this is an estimated 30 percent reduction in work efficiency, according to Barclays Bank. More insidiously, hiding allows those who seek to deny LGBT people equal treatment to say that there really isn't a problem at all.

There is, of course, a big problem, one with hidden costs. Living a lie stunts development and warps character. Abuse and disrespect scar victims' psyche. Being treated as if you are different hurts; most would do anything to avoid it. Exhausting attempts to hide prevent people from reaching their full potential; they are always holding themselves back. The closet approach loses business money.

Yet until LGBT people are protected by law from discrimination, they will have no protection from dismissal or maltreatment at work, from eviction, from being refused access to a loved one in hospital, from rude and discriminatory treatment in commercial outlets. It is just not safe for most LGBT people to be open about themselves in Hong Kong. Small wonder that Community Business found that 57 percent of people say they do not know a single person who is LGBT.

Hong Kong has laws to ensure equal treatment in matters of sex, family status, disability and race. Why not, then, protect our sexual minorities? The government has been telling us for a long time that, whilst it recognizes the justice of the arguments for protection, it will not act because of "a lack of consensus". This is never an argument for failing to protect minorities, though in itself it may once have been true.

No more. The sands of public opinion have shifted beneath the government's feet. Its line is now a lie that has been exposed by survey after survey. Community Business found that 58 percent of Hong Kong people were "accepting" of LGBT individuals. The survey conducted for Legislative Council (LegCo) member Cyd Ho Sau-lan found that 75.2 percent of respondents thought that there should be a law against discrimination on grounds of sexuality. It is now widely known that the government conducted its own surveys in late 2012, which found similar figures, though it kept both that fact and the results secret.

Yet in his first policy address in January 2013 Chief Executive Leung Chun-ying refused even to allow public consultation on the issue. He was, it seems, advised that it would be just too difficult a fight. How could this be? The government accepts the need to protect its minorities. The public, it is clear, now does too. There can be only one reason for this failure to act, and that is the power of the opposition. 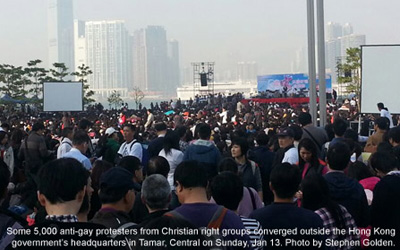 Some 5,000 anti-gay protesters from Christian right groups converged
outside the Hong Kong government’s headquarters in Tamar, Central
on Sunday, Jan 13, 2013 to rally against the enactment of
anti-discrimination laws to protect LGBTQ individuals.

Who is this opposition? We have to be clear about this; there is only one source of opposition to reform, and that is the majority of Hong Kong's Christian churches. They alone demonstrate against LGBT rights outside government offices. They alone spend money to place their views in newspapers and on billboards. Only their priests galvanize their congregations; and their teachers the parents of the children they teach to lobby government. The fundamentalist Protestant churches and their proxy organizations do this openly. The Roman Catholic Church does so quietly behind the scenes.

There is no mistaking the power these churches have to influence government. The schools, medical institutions and welfare organizations financed and run by Christian churches place them in powerful positions in the most crucial areas of society. Many of the Christians who are to be found in key posts in public service and politics are not afraid to exercise their influence to allow discrimination to continue. To them, issues of human rights and protection from harm count not at all; the belief that same-sex relationships are a sin is all that counts. That is why, despite its much-vaunted code of employment practice, the government is one of the most discriminatory employers in Hong Kong. It is just not possible to be an openly gay teacher, a bisexual social worker or a lesbian doctor in most of our schools, welfare departments or hospitals.

Why adherents of a religion that preaches universal love should contradict itself by discriminating against a weak and helpless minority is a deep question for another day. What is abundantly clear, though, is that Christianity has a hold upon Hong Kong's government that makes a mockery of its claim to be governing a fair society based upon the rights enshrined in its constitution.

If we are to bring an end to the harm that certain twisted Christian beliefs are doing now to Hong Kong's minorities, Christian opposition to a law against discrimination must be faced down.

The article was first published by the Hong Kong-edition of China Daily on Oct 3, 2013 and is republished with permission.