On October 14, a regional network of LGBT rights organisations launched a video in response to the exclusion of Sexual Orientation and Gender Identity/Expression (SOGIE) from the language of two recently adopted declarations protecting women and children from violence, and in the ASEAN Human Rights Declaration last year.

The following press statement was issued by the ASEAN (Association of Southeast Asian Nations) SOGIE (Sexual Orientation and Gender Identity/Expression) Caucus on Oct 14, 2013:

The video is part of a bigger campaign called “We are #ASEANtoo!” which was launched a week before the 23rd Association of Southeast Asian Nations (ASEAN) Summit on October 9 to 10, in Brunei. The Declarations on the Elimination of Violence Against Women and Elimination of Violence Against Children (DEVAW and DEVAC respectively) were set to be adopted at the said summit. 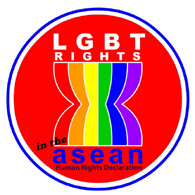 “The ASEAN Sexual Orientation and Gender Identity/Expression Caucus (ASC) started this campaign because of the many challenges we faced in ensuring that the two declarations explicitly mentioned SOGIE. Even with the help of our allies, we felt there was a high possibility that SOGIE would be dropped,” said Ron de Vera, ASC spokesperson.

“When we saw that the officially adopted declarations didn’t mention SOGIE, we were very disappointed. We are also deeply concerned that there is an emerging pattern of SOGIE exclusion from human rights declarations in the ASEAN,” added de Vera.

This is the second time SOGIE was not mentioned in the language of an ASEAN declaration. The first was in the ASEAN Human Rights Declaration adopted by the ASEAN on November 18, 2012.

The process of drafting the two declarations required national consultations by each country’s women’s caucus. This was meant to ensure participation of civil society organizations (CSOs). However, the drafts were not widely circulated, prompting CSOs to call out the ASEAN for its lack of transparency.

Discrimination, harassment, and violence against individuals of diverse SOGIE continue to be a heightened human rights issue in the region where laws related to SOGIE vary from one state to another. 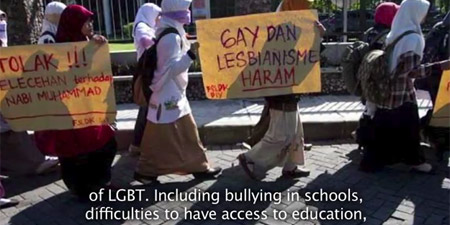 Video screenshots: LGBTs face religious persecution in Indonesia (above)
and the Philippines (below). Above: "Gay and lesbianisme is a sin." 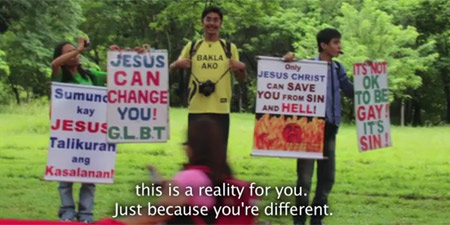 According to Social Action For Equality (SAFE), a Manila-based organization that monitors hate crimes against Lesbian, Gay, Bisexual, and Transgender (LGBT) people, there have been more than 164 LGBT killings in the Philippines since they started monitoring media reports in 2009. Figures on violence against LGBT people remain underreported due to poor protection mechanisms and legislation in the region.

“Lesbians, bisexual women, and trans women (LBTs) in all ASEAN countries face violence too. Their experience is further aggravated by the hate and stigma that come with their gender and sexuality, and that is why we need SOGIE to be explicitly mentioned in ASEAN declarations. Why exclude them? They are productive members of the ASEAN community too!” said de Vera.

The (ASC) is a network of activists and organizations in ASEAN member states who work to ensure people of diverse SOGIE are not marginalized from ASEAN-level mechanisms and processes.