The Australian Capital Territory has become the first jurisdiction in Australia to legalise same-sex marriage. 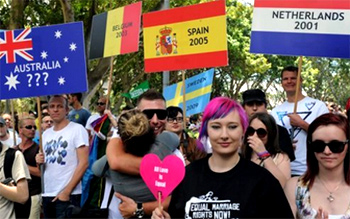 The bill passed after a short debate today by nine votes to eight, just over a year after federal parliament rejected a same-sex marriage bill 98-42. The move was passed in the 17-member ACT Legislative Assembly, backed by Labor and the Greens, with the Liberals voting against.

According to local media reports, the public gallery stood and broke out in rendition of Love is in the Air following the passage of the laws, followed by raucous applause.

Same-sex couples will be allowed to marry in ACT, regardless of which state they live in. The ACT is home to less than 400,000 people and where the nation's capital Canberra and the seat of government is located.

"We are making a clear statement about the sort of society that we want to live in," the ACT's openly gay deputy chief minister Andrew Barr told the assembly, reported News.com.au. "Whether it's the rainbow territory or the city of love, it's an important journey for us."

Barr broke down as he spoke of the struggle of gay and lesbian Canberrans and their families. He said: "Today's legislation continues the tradition of nation leading reforms from the ACT government. Reforms that impact positively on the lives of thousands of Canberrans living in same sex relationships, but reforms that also impact positively on the parents... parents who want their children to live happy, productive and healthy lives without having to experience fear, hate and discrimination."

Greens MP Shane Rattenbury called the passing a "landmark moment" and said it should be the start of all governments in Australia striking down inequality. "This is a reform for ACT citizens and there is no reason... we should not be addressing this matter," he said.

Federal law specified in 2004 that marriage was between a man and a woman, and the federal government has announced that it will challenge the move.

The first weddings could be held from December, provided the federal government doesn't seek an injunction preventing ceremonies going ahead before the new laws are tested in the High Court.

In related news, Prime Minister Tony Abott's sister, Christine Forster, this week announced her engagement to her long term partner, Virginia Edwards. Her brother and national leader of the Liberal Party, Tony Abbott, does not support same sex marriage and has said he disagrees with those in favour of legalising gay marriage.

Forster, who is a Sydney City Councillor, has meanwhile called for federal Liberal MPs to be allowed a conscience vote on the issue if legislation comes before the Parliament. She added that her brother had congratulated her and her partner on their engagement and said he would be "there at the wedding" which she hopes to have in Sydney "ideally" under a federal marriage act, reported ABC News.