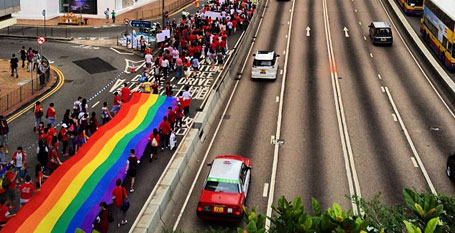 It’s been a busy start to the year in Hong Kong with news from the courts and the people suggesting that acceptance of the LGBT community is tentatively on the up. Let’s have a quick look at what’s been going on.

A new study has been published by Hong Kong’s Center for Comparative and Public Law. The good news is that the report suggested that 74% of the Chinese autonomous territory’s people supported legal recognition for same-sex relationships. The bad news is that support for same-sex marriage still remains low.

Hong Kong currently has no laws protecting LGBT people from discrimination. Researcher Holning Lau said that the results should encourage the government of the special administrative region to take steps in ensuring same-sex couples rights. “Our findings suggest that there is public support exploring [LGBT equality] options in Hong Kong,” he said.

A gay activist, known only as T, has fought down an appeal by the police challenging a ruling of last July. The original case goes back to a 2011 LGBT rights demonstration when the police barred T and another 100 participants dancing at the rally.

Police argued that the organisers had not obtained a license (under the Places of Public Entertainment Ordinance) for the dance ‘performance’, only for the demonstration. The Court of Appeal decided that the dancing did not merit the use of this ordinance.

Human rights lawyer Michael Vidler, who was representing T, expressed the great importance of the decision. “The reason why the police had fought to do this is because they had been trying to use a piece of subsidiary legislation to extend their powers to control demonstrations,” said Vidler. “This is an important case that has wider implications for all demonstrations, especially in the lead-up to Occupy Central.”

However, the marriage laws of the region have not been changed the ruling still has limitations. The court order only applies to post-operative transgender people in opposite-sex couples and has not yet been successfully adopted by the government.

University of Hong Kong associate professor and a director of the World Professional Association for Transgender Health, Sam Winter, expressed his disappointment in the Hong Kong Government, saying “The government is taking the minimalist approach, the draft legislation is not inclusive or comprehensive enough.”