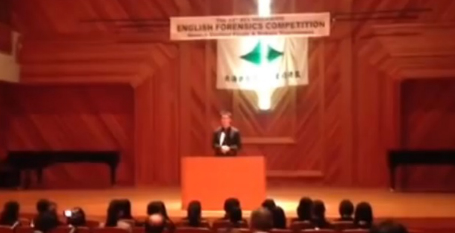 An unnamed Japanese student has given a moving speech about the discrimination felt by LGBT people in the contemporary world.  Borrowing the legendary words of Martin Luther King, the student commented on global gay issues as well as his own experiences as he came out to his classmates and teachers.

Here is the transcript of the speech:

This summer, shocking news ran through the world. The Russian president, Vladimir Putin, issued a law to restrict the rights of gay people. Many Western countries are quite offended by this idea, and some people believe that we should boycott the Olympics, which will be held in Sochi next winter. The charter of the Olympics declares that the spirit of Olympics is to act against any form of discrimination affecting the Olympic movement. According to this policy, we have to say this law is totally against the spirit of the Olympics.

Why do gay people have to face discrimination? Is it because they are not heterosexual? Is it a sin to love somebody of the same gender? The law cannot control love or people's feelings.

Discrimination is the practice of treating one person or group differently from another in an unfair way. In a sense, human history has been repeating itself, one kind of discrimination after another. Racial, sexual, religious discrimination and so on.

This year the United States celebrated the 50th anniversary of the "I Have a Dream" speech made by Martin Luther King. In his speech he was dreaming of the world without any discrimination where his children are living happily with different races. His speech has encouraged African-Americans, Native Americans, as well as minorities all over the world to move forward for civil rights.

I have faced discrimination too. I am gay. I realized this when I was a junior high school student; although I never told anybody, somehow my classmates guessed that I was. They rejected me and treated me like I was not a human being; one girl said to me, "I can't believe someone like you exists." It made me feel like I was completely alone. In high school I decided to keep my secret safe and never tell anyone about who I really am on the inside. But this year I wanted to stop hiding that part of myself.

In Western countries such as the States and in Europe gay people are seen as a normal part of society, just as the difference of white and black, man and woman, Christian and Muslim. Although there are problems, the gay community is visible and is trying to make changes.

In Japan, we are afraid of being different, but we don't show our hate so openly. It is silent discrimination. If nobody talks about the problem, then it doesn't exist. Many gay people in Japan hide who they really are because they are afraid of being rejected, not with angry words or threats of violence, but with isolation. Being gay in Japan is a very lonely existence.

Maybe it will be difficult for me to live my life just like other people. But this is my life. I'm going to live it no matter what people say. Martin Luther King once said, "Take the first step in faith. You don't have to see the whole staircase, just take the first step." When I feel scared I often think of this quote. Making this speech was my first step. I never thought that I could tell people that I am gay.

I too have a dream. One day down in the meadows of Hokkaido, gay people and straight people are chatting together and eating BBQ in the sunshine. I have a dream of a world without any prejudice, hate, or ignorance which causes blind discrimination against what we can't understand. I can see the road ahead will be difficult, but I must be brave. Not just for myself, but for other young people like me.