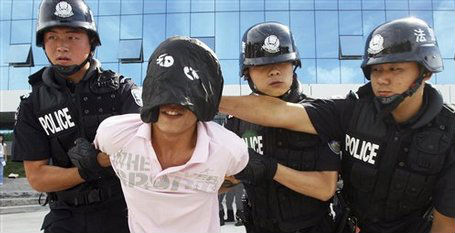 Beijing police May 7 detained as many as nine civil society activists meeting for a seminar to discuss obstacles facing gay groups wishing to register as nongovernmental organizations in China.

The group had advertised itself as an event examining “civil society and the state,” reported sinosphere.blogs.nytimes.com.

The report suspects that the arrests and detention were not particularly because they were gay activists or discussing gay issues but due to Chinese authorities’ anxiety over possible citizen action ahead of the 25th anniversary of the military crushing of the Tiananmen Square democracy protests that took place on June 3-4 1989 in Beijing.

Police seized the cellphone of one of the detainees, then sent a text message to about 30 participants in a meeting set for later in the day and canceled it, Yu Fangqiang, one of the meeting’s organizers told sinosphere.blogs.nytimes.com.

“About 15 to 20 police came to our hotel at 1:30 in the morning in three vehicles and took five of us away,” said Yu, whose Nanjing-based nongovernmental organization, Justice for All, has taken on several cases of discrimination on the basis of legal residence and HIV/AIDS.

Yu said the group was questioned until noon, with the police saying they were following “orders from above,” and who retroactively served orders to come to the station on the charge of “disturbing public order.”

Yu said he and two other meeting organizers were released at noon but two other members of the group remained in detention.

Other organizers were taken from another hotel, Yu said.

In all, nine people who planned to attend the meeting were detained, with four still missing.

Contacted by telephone at the Shuangyushu police station in the Haidian district of Beijing, where Yu’s group was questioned, police declined to confirm the detentions but could be heard discussing the case in the background, reported sinosphere.blogs.nytimes.com.