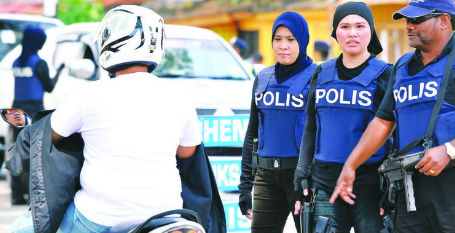 Malaysian religious police arrested a lesbian couple after raiding a hotel room in Johor Baru where they were staying, media reported.

The two young women had been arrested by officers of the Johor Islamic Religious Department, according to outinperth.com citing a Sinar Harian newspaper report.

The newspaper reported nine officers searching the hotel when they came across the two women sharing a room and that during the search of the women’s room a sex toy was discovered.

Both women could face up a fine of 5000 Malaysian ringit (US1,575) or up to three years in jail and six strokes of the cane just for being in a same-sex relation.

The women reportedly told police that they bought the sex toy online and although it had been opened, they had not used it.

The newspaper that published the story also carried with a photo of the two women talking to police during the search. Although the women’s faces were blurred in the image rights organization Sisters of Islam have called for the police to conduct a thorough investigation for why the photo was included but also the police raid and arrest.

Sisters of Islam’s legal officer Rashidi Abd Rahim speaking to the ‘Raykat Post’ pointed out that the news reports had failed to show any criminal act had taken place and the onus was on prosecutors to prove that a sexual act had indeed taken place.

Earlier this year the Malaysian government declared one of the country’s leading human rights groups illegal the Comango group lodged a report with United Nations criticizing the country’s stance of LGBTIQ rights.

The country retains “Section 377A” a British colonial-era law banning “carnal intercourse against the order of nature” and outlaws same-sex relations and can be jailed for up to 20 years, caned or fined.

The government’s attitude towards the LGBT community is shaped by Islam, the official religion in Malaysia. Muslims who make up over 60 percent of Malaysia’s of 29 million people.