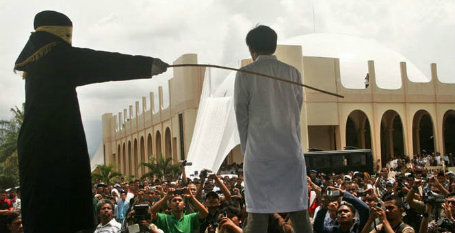 Indonesian parliament might pass a law allowing the country’s utra-conservative Aceh province to punish same-sex relations with 100 lashes of the cane.

Although Indonesia is the world`s most populous Muslim-majority nation,  Aceh is the only province to enforce  Islamic sharia law since 2001, when it gained some powers of autonomy after protracted seceding related  problems.

The law would also punish adultery with 100 lashes of the cane, it said.

Ache already bans alcohol consumption, gambling, fraternizing between unmarried men and women, and physical displays of affection outside of marriage.

AFP also reported that eight men were recently caned for gambling in the provincial capital of Banda Aceh and that this was watched by about 1,000 people cheering and filming. “Canings in Aceh are often carried out with a long thin rattan stick and are aimed at humiliating, rather than causing pain,” it said.

Aceh Party`s Ramli Sulaiman, who heads the commission that drafted the law told AFP: “We have studied the implementation of sharia in countries like Saudi Arabia, Brunei Darussalam and Jordan to draft this law and we are happy with it.”

Amnesty International has expressed concern and reiterated its call to end caning in Aceh, saying it goes against international laws on torture and rights, as well as Indonesia`s own constitution.