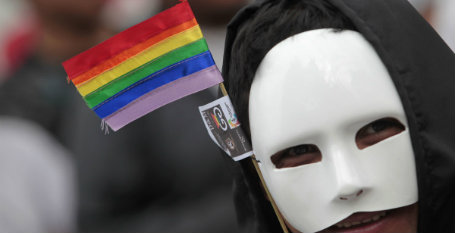 Malaysian Islamic-purity enforcing police are making it increasingly difficult for transgender men and women to live a life without fear of arrest and harassment in a country where Islam is the official religion.

Malaysia is one of the world’s worst countries for transgender people, said Human Rights Watch which recently released a report in which it detailed social ostracism, discrimination, harassment, sexual abuse and arrest by authorities.

The country retains “Section 377A” a British colonial-era law banning “carnal intercourse against the order of nature” and outlaws same-sex relations and can be jailed for up to 20 years, caned or fined. The government’s attitude towards the LGBT community is shaped by Islam, the official religion in Malaysia. Muslims who make up over 60 percent of Malaysia’s of 29 million people.

Locally enforced state-level laws on Islamic purity also criminalize dressing as the opposite sex, and can be punished by three years in prison and a fine.

Police recently burst in to the home or a person born a man but identifying as a woman ransacked her apartment and arrested her for cross-dressing. “It’s difficult,” said the person with long hair dyed reddish-brown and a heavily-powdered face.

Many like that person within the transgender community also complain of rising persecution. “Here we live in fear. We are treated as criminals. We are not treated as humans,” another said.

Three transgender women who were arrested four years ago have taken their battle to court in a lawsuit in the southern Malaysian state of Negeri Sembilan. They maintain that discrimination against the transgender community is discriminatory and unconstitutional. Activists hope they will win and that it will set a precedence in other Malaysian states. A ruling in that case is expected in the first week of November.

“I hope for success. I have been waiting so long already,” said one of the four.

In 1982, the National Fatwa Council, Malaysia’s highest Muslim authority, banned sex-reassignment surgery describing it as un-Islamic which have prompted authorities to since take a harder line against transgenders.

Prime Minister Najib Razakhas repeatedly has repeated said he is against gay and transgender rights initiatives because he views them as deviant.