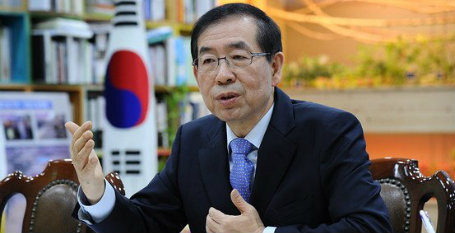 The mayor of the South Korean capital Seoul has become the first mainstream Politian in the country to indorse marriage between same-sex couples.

“I personally agree with the rights of homosexuals,” Park said. “Once [activists] persuade the people, the politicians will follow,” he pointed out, the blogs.wsj.com reported.

His stance is significant because Park is a likely candidate in the 2016 presidential election. His remarks are a rare endorsement of gay rights in largely conservative South Korea where many Christian and Buddhist denominations play a big role in opposing equality rights.

“Iit could be politically risky should he run for presidency (as) the vast majority of South Koreans have negative attitudes against gay people, let alone same-sex marriage,” blogs.wsj.com said citing  recent polls.

Politicians remain under pressure from religious groups that oppose gay rights, it said.

Male and female same-sex relations is legal in South Korea although it is not specifically mentioned in either the South Korean Constitution or in the Civil Penal Code.

South Korea’s views towards same-sex relations have undergone some positive changes  recently largely due to an increased level of awareness from a number of gay celebrities coming out.

Nonetheless, general awareness of same-sex relations remains low among the Korean public and Korean gays and lesbians still face difficulties, and many prefer not to reveal their gay identity to their family, friends or co-workers.