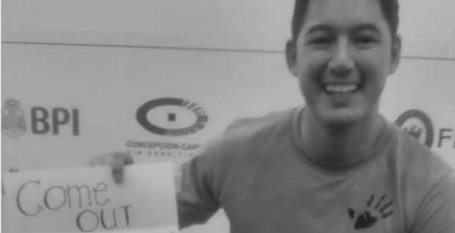 People in Manila are taking part in a campaign to encourage and support the LGBT community as well as denounce anti-gay discrimination by pushing for equality status between gay and straight people.

“Philippines—Come out for happiness” was how Cha Roque, a lesbian mother and video production professor, chose to convey her enthusiasm in a photo she submitted in support of the “Come Out for Love: Kasi Pag-ibig Pa Rin” campaign of this year’s Metro Manila Pride 20th anniversary celebration, according toinquirer.net.

#ComeOutforLove is a person-centric campaign that aims to gather stories of support, acceptance and bravery both from the LGBT community members and others.

Through the online photo campaign, participants are encouraged to share a photo and personal story on Facebook, Twitter or Instagram using the hashtag #ComeOutForLove and showing their message of what or for whom they are coming out.

“I joined the campaign because I want the world to respect and recognize the love I share with my partner… I want to have the freedom to tell the world that I am a woman loving woman without being judged for it. I am a lesbian mom and I have no excuses, no apologies, no regrets,” said Cha.

Cha told inquirer.net  she’s always been active in advocacies and movements that are pro-LGBT. She’s been “out” to her family whose acceptance of her sexual orientation has been a big factor with her being comfortable in sharing her personal story.

“I am overwhelmed because I have seen the entries of parents of LGBT’s, the letters showing their support…like how I was overwhelmed with my mom agreeing to be a part of the documentary I made for stories of ‘being me’ when she said ‘Of course, she’s my daughter, I’ll accept whatever makes her happy.’”

Speaking at the launch, Task Force Pride Philippines Partnerships Head Red Macalalad said the campaign is a testimony of what coming out does for the community. “It increases [the number of] people to have the courage to come out and to be comfortable about themselves in public,” he said.

According to Macalalad there are still many stories of violence and hate crimes, of people being discriminated at home, school or workplace. Congress too has yet to pass an anti-gay discrimination bill.

Presently only two out of 81 provinces and seven out of 1,637 cities and municipalities in the country have anti-discrimination protection, according to the Philippine Statistical Agency.