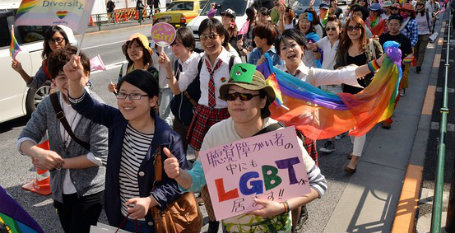 The Asahi Shimbun poll showed 52 percent of those surveyed approved the plan by Shibuya Ward to recognize same-sex couples as “equivalent” to those married.

The majority of those polled by a major newspaper in Japan say that they are in favor of a plan by a ward in Tokyo to issue same-sex partnership certificates.

The Asahi Shimbun poll showed 52 percent of those surveyed approved the plan while just 27 percent opposed it.  Also, 41 percent said they wanted Japanese law to approve marriages between same-sex couples as opposed to 37 percent who said it shouldn’t. Opposition came from those aged 70 and older, the paper said.

The survey was conducted Feb. 14-15 and polled 3,932 households with 56 percent favoring the certificates compared to 48 percent of men.

It was in response to Tokyo’s Shibuya Ward last week saying it planned to issue certificates to same-sex couples and recognize them as “equivalent” to those married under Japanese law. Same-sex couples could apply for “proof of partnership” certificates starting April 1.

The certificates will not be legally binding as same-sex marriage is not recognized in Japan since the constitution describes marriage as “the mutual consent of both sexes.”

However the certificates are seen as designed to support sexual minorities, the ward said.

Shibuya Ward, which is a semi-autonomous locality, has many international firms and embassies, trendy fashion houses, cafes and schools.

We have decided to issue the ‘partnership certificate’ as part of our drive to create a society that respects people regarded as a sexual minority,” said Shibuya Mayor Toshitake Kuwahara, according to a report published in Japan Today.

The ward is scheduled to submit a draft statute to the municipal assembly for consideration next month. If passed it will become the first local government to issue such a certificate in favor of same-sex couples.

Media also reported that neighboring Setagaya Ward, Tokyo’s most populous ward, too was looking to support the LGBT community. Setagaya Mayor Nobuto Hosaka told The Japan Times that Shibuya’s move to consider same-sex relationships as “equivalent to marriage” was a precedent that prompted Setagaya to see if it too could do the same for its LGBT community.

The Japan Times noted that “Setagaya is known for sensitivity to its LGBT residents.” In 2003, it removed a male/female gender box from some official documents in recognition that sexuality doesn’t always match the binary genders. The ward also has a counseling hotline catering to the LGBT community and holds an annual seminar for its officials on equality.

Same-sex relations was legalized way back in 1880 in Japan and although Japanese culture does not have a history of hostility toward LGBT people, they nonetheless lack legal recognition and are often subjected to social discrimination such as being barred from renting apartments together or from visiting each other in hospitals.

It is estimated that 1 in 20 is estimated to be either gay, lesbian, bisexual or transgender, according to a 2012 Internet survey conducted by advertising giant Dentsu Inc.