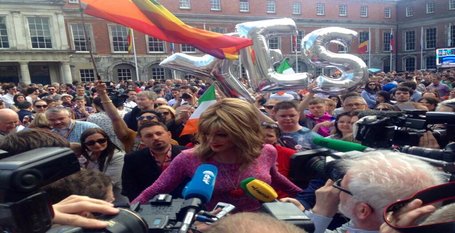 Global celebrations after Ireland votes in favour of gay marriage

Historic referendum that led Ireland to be the first country to legalize gay marriage by popular vote has encouraged outpouring of support and celebration.

On Friday people living in the Republic Ireland voted in favor of same sex marriage. Almost two million people voted with 62% voting yes. Although the Vatican described the vote as a 'defeat for humanity,' the landmark victory for LGBT has sparked an upswell of positive reactions from around the globe:

Ban Ki-Moon, the UN secretary-general praised the vote for same-sex marriage and showed it was a sign that Ireland wants to make sure no community is left out of society.

Famous Irish band, U2, performing in Phoenix declared “It's a moment for us to thank the people who brought peace to our country, who had the courage to compromise in Ireland.” They played their 1984 hit "Pride" and altered the lyrics to bear reference to the referendum.

Ellen DeGeneres also voiced her joy at the vote result and said: "Ireland did it! The 1st country to legalize marriage equality by popular vote, but they won't be the last! What an incredible accomplishment."

Significantly, the Irish referendum has stirred same sex marriage debate around the world with communities demanding a similar move in Colombia, Germany, Italy, and Australia.