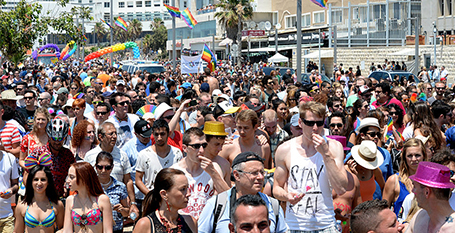 Tel Aviv has, in recent years, become one of the world's leading and most famous gay tourist destinations, thanks to its tolerant atmosphere

In light of her recent coming out and Vanity Fair cover shoot, the City of Tel Aviv on Thursday invited Caitlyn Jenner to be a guest of honor at its LGBT Pride Week celebration.

"In sharing publically your private and intimate journey, as well as the difficulties you faced along the way, you became a huge inspiration here in Tel Aviv, and a person we all look up to,"  Weizman wrote Jenner in the invitation.

There is over 50 events throughout the week, including a party on 12 June with guest of honor Conchita Wurst. Conchita Wurst represented Austria at the 2014 Eurovision Song Contest with her entry Rise like a phoenix, and brought the Eurovision trophy on Austrian soil for the second time in Eurovision history.

LGBT rights in Israel are some of the most advanced in the Middle East and Asia. Same sex unions are acknowledged and recent polls have indicated that a majority of Israelis support same sex marriage.