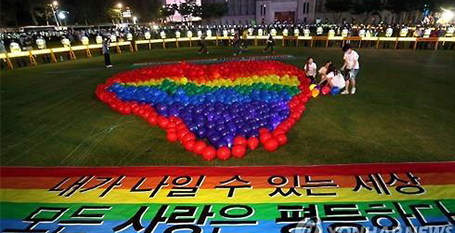 Seoul's LGBT festival begins amidst MERS and protests from Christians

The 16th Korea Queer Festival kicked off yesterday (Tuesday), with a low turn out blamed on the MERS virus and opposition by Christian groups.

Seoul's annual LGBT festival, Korea Queer Festival, was official launched yesterday at Seoul Plaza. It is the first time the ceremony has been held in the centre of Seoul.

The pride parade which was to take place at the end of the festival, was refused permission by police due to fear of conflict with opposing Christian groups. EU Ambassador Tomasz Kozlowski and French Ambassador Jerome Pasquier were also in attendance.

"Our festival is where sexual minorities in South Korea get to communicate with and instill morale in each another," said Kang Myeong-jin, of the organizing committee. "It's where we exhibit positive energy despite all the stigma we've faced."

Due to the Middle East Respiratory Syndrome which has struck Korea and so far claimed seven lives, participants had been urged to watch the opening show live on YouTube. Organizers said about 1,400 viewers watched the event live online.

Tensions also arose this week after a message was spread on social networks by an anti-gay activist, accusing homosexuals of being a collective risk of transmitting the MERS since "they have HIV". This attack has sparked unrest and protests among the gay community, as reported by the The Korea Observer newspaper.

The Gay Pride Parade in Seoul was first held in the year 2000 with an approximate attendance of 50 people, and in 2014 it registered some 20,000 participants, according to the organisers.