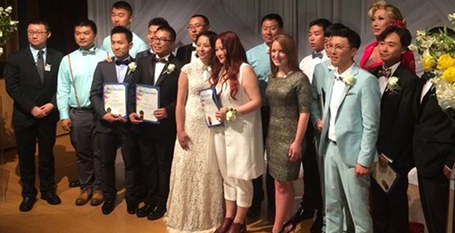 Six gay couples and one lesbian couple were married in West Hollywood, Los Angeles in a ceremony sponsored by Alibaba.

More than 2,000 couples applied to the "We Do" contest hosted by Chinese ecommerce giant Alibaba. To win the contest, couples had to submit a video sharing their love stories to Taobao, an online marketplace owned by Alibaba. The contest was also sponsored by Blued, a social media app popular with gays in China.

Charlie Gu, of China Luxury Advisors, organised the wedding in West Hollywood. Mr Gu's job is to help luxury brands market to the growing number of Chinese travellers and consumers. "For a company like Alibaba there is also a strong business interest in this," Mr Gu said of the mass wedding, according to BBC news.

“We’ve been together for almost eight years, so we want to give each other a promise or a commitment for life,” Hu Zhidong, one of the grooms, told Malaysia today.

While the couples’ marriages are recognized in California, which legalized gay marriage in 2013, their unions will not be legal in China. China decriminalized homosexuality in 1997, but does still not allow gay marriage or offer equality legislation.