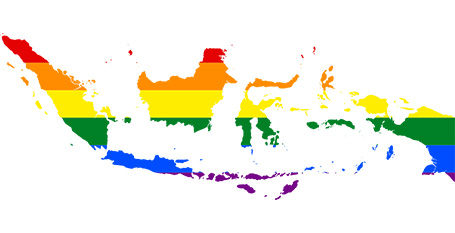 Milestones of the Indonesian LGBT movement

The Jakarta Post has outlined some of the pivotal moments in the LGBT movement in Indonesia.

LGBT advocacy began in Indonesia may date back to the 1960s when the Jakarta governor Ali Sadikin first facilitated a transgender association in the city. The article also goes on to note that after 1998 reform LGBT groups in the country could become more political.

1960: Establishment of the Jakarta Transgender Association (Hiwad) in Jakarta, that encourages similar set ups in other cities.

1982: Creation of the first public gay organization, Lambda Indonesia.The organization was disbanded in 1986.

1987: Creation of GAYa Nusantara, the oldest LGBT group in Indonesia that is still in existence.

1998: Lesbian and bisexual women, as well as transgender men, participate in the Indonesian Women’s Congress in 1998.

2006: Signing of the Yogyakarta Principles, the first international principles on the application of international human rights law in relation to sexual orientation and gender identity.

2007: Establishment of the Gay, Transgender and Men Who Have Sex with Men Network (GWL INA).

2008: After the third International Lesbian, Gay, Bisexual, Trans and Intersex Association (ILGA) Conference in Thailand, six LGBT organizations team up to strengthen the movement, the forerunner of today’s LGBTIQ Forum.

2013: National Commission on Human Rights (Komnas HAM) sets LGBT rights as a topic for a plenary discussion for the first time in 10 years.