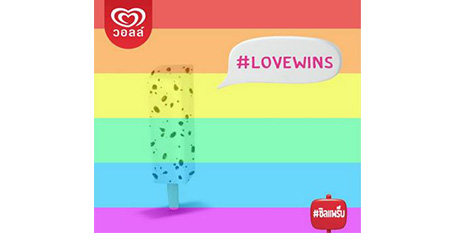 Wall's ice cream in Thailand was forced to apologize for its celebration of the legalization of gay marriage on Facebook.

The uni-lever owned company uploaded an image with its black bean flavored ice cream saying '#lovewins" in celebration of the Supreme Court's decision in the US.

Black beans is a derogatory term used for gay men in the country. The illustration was denounced as low and discriminatory.

"Black beans" is a demeaning slang term for gay men that originated from a famous pedophilia case in Thailand.

The image was quickly removed and replaced with a new picture of a rainbow-coloured ice cream but was shared liberally on Twitter with the hashtag #RIPWallsThailand.

Wall's Thailand issued an apology on Sunday, saying they were "sorry if the post created some misunderstanding" and that they "did not mean to cause discomfort to anyone."