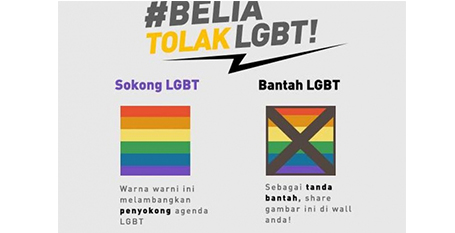 The National Muslim Youth Association (known as Pembina) in Malaysia has launched a social media campaign against the LGBT community in response to the US Supreme Court's ruling on gay marriage last week.

Pembina encouraged users to change their profile image to a crossed out rainbow flag in response to the rainbow enhanced profile photos on Facebook supporting the ruling.

They also tried encouraged the use of the hashtag #BeliaTolakLGBT which translates as "Youth against LGBT."

“[The profile photo] has become a trend and is followed by non-Muslims across the world. In Islam it is clear that same sex relations are completely forbidden,” said the group, according to the Malay Online.

“But what was really sad is Muslims themselves have followed the direction to support the LGBT by changing their profile pictures and showing their support under the name of freedom for the LGBT,” the group also said.