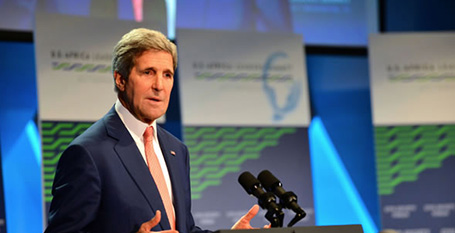 US Secretary of State, John Kerry raised the case of a leading opposition figure who is serving a five-year prison sentence after his conviction under the country’s anti-sodomy law in a meeting with Malaysian Prime Minister Najib Razak.

“Secretary Kerry raised the issue of human rights in all of his meetings in Malaysia,” Toner told the Blade. “I also can confirm that he spoke with Prime Minister Najib. He did raise Anwar’s case. “We’ve been very clear from this podium and that gay rights are human rights,” Toner also said.

Anwar was accused of sodomy in 2008 but acquitted in 2012. Prosecutors re-filed charges against him and he was sentenced to five years in prison. A sentence that has been upheld by the country’s highest court.

The conviction has been criticised by the UN High Commissioner for Human Rights and Anwar himself describe’s the charges as “a fabrication coming from a political conspiracy to stop my political career.”

Homosexuality remains criminalised in Malaysia, along with neighbouring Brunei and Singapore.