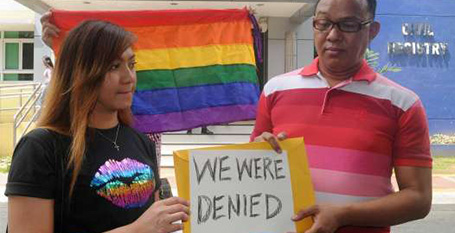 Two same-sex couples applied for marriage licences this week. They were promptly rejected by the government.

A lesbian couple and a gay male couple have applied for marriage licences in Manila, hoping to raise awareness about gay rights in the country.

The Philippines government has previously said that no same-sex unions will be recognised unless a law was passed. Such legislation is unlikely to make it passed legislators allied with the conservative catholic church.

Ibanez and Agbayani posed for photos in front of the of the registry office with a sign aying "We were denied" and a rainbow flag.

"We expected it would be denied but we tried it anyway....We thought maybe there would be a miracle and it would be approved," Ibanez, a 33-year-old call centre worker, told AFP.

"The right to marry is guaranteed by our constitutional rights to equality, equal protection of the law, privacy, and religion," she told Straits Times.