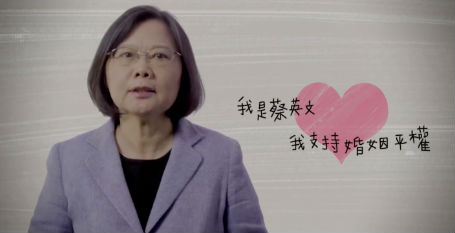 Tsai Ing-wen, leader of Taiwan’s Democratic Progressive Party (DPP) and presidential candidate for elections in January, is showing clear support for gay marriage in the country

This is the first time the DPP will join the parade under their own banner though Tsai herself will not be attending.

On Friday night the headquarters of the DPP were lit up in rainbow lights and a video shared on Tsai’s Facebook and she commented that “if there’s love, there’s light in life”

This morning Tsai posted another video in which she declared “I am Tsai Ing-wen, I support marriage equality.” It is her clearest move towards marriage quality so far. In the video she also says that “before love, everyone is equal.”

Links to the videos below.