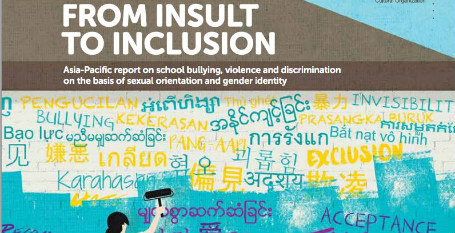 An Asia-pacific report from UNESCO highlights bullying, violence and discrimination on the basis of sexual orientation and gender identity.

A report, From Insult to Inclusion, released by UNESCO last week documents the widespread failure to address homophobic and transphobic bullying in schools across Asia and the Pacific.

The document comes on the heels of 12 United Nations agencies pledging to address violence and discrimination against LGBT people.

The report paints a rather depressing picture of the region, stating that schools are overwhelmingly unsafe for LGBT students.

It highlights facts and figures such as a 2013 survey in Thailand that found 56 percent of the LGBT students polled reported being bullied in the previous month and that the government of South Korea in early 2015 banned mention of homosexuality in sex education classes.

The report also notes that laws and attitudes affecting the wider LGBT population "are still a significant barrier to addressing issues of violence and discrimination against LGBTI young people."

There have been promising recent changes in the region, however. A 2013 act in the Philippines instructed schools to address bullying, and specifically refers to sexual orientation and gender identity.