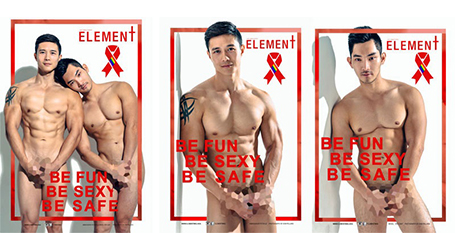 Peter Le and Eric East went full nude for the “Be Fun, Be Sexy, Be Safe” HIV Awareness Campaign

Singapore, November 30, 2015 – In time for the World AIDS Day on 1st December, Asia’s leading LGBT media network ELEMENT appointed Peter Le, the most recognized Asian face in the adult entertainment industry, as the ambassador to kick-off its 2nd edition of HIV Awareness Campaign.  Its previous HIV Awareness Campaign in 2013 featured 9 male models, both straight and gay.

Peter Le is by far the most famous Asian face in the GV industry across Western and Asian continents. This is the first time Peter fronts an HIV awareness campaign. When he was asked why he decides to join hands with ELEMENT for the campaign, the actor and producer said, “HIV is a big concern in the community, I just want to do my part. ELEMENT is the most famous Asian gay magazine, so working with them would definitely help spread the awareness as far as possible”.

According to ELEMENT, in addition to traditional press members, these photos exclusively shot for the campaign will be shared across social media platforms such as Facebook, Instagram and as well as HIV care centers, LGBTI NGOs and Gay Pride organizers in an effort to continue creating as much awareness as possible for encouraging regular HIV testing and safe sex practice.

The tagline for this campaign is called “Be Fun, Be Sexy, Be Safe”.  ELEMENT has planned a series of editorial feature line-ups as a part of the campaign for the entire year of 2016. Starting from its December issue this year, the magazine will carry interview features with leading adult GV actors, personal stories on HIV and drug abuse, sexual health column on prevention measures, and to actively report on other HIV awareness projects.

“We urge all to spread the importance of HIV prevention and testing and we hope our campaign could be supported by the community”, said Desmond Yeo.