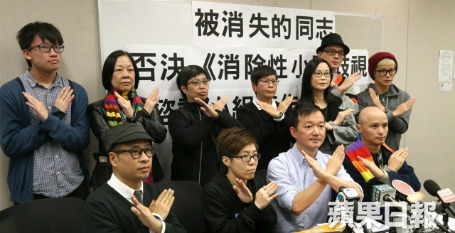 Last week, a press conference was organised by some of the city’s most prominent LGBT supporters. A total of nine organisations included lawmaker Ray Chan Chi-Churn and singer Denise Ho Wan-see, to denounce the report.

Significantly Chan, who was a member of the advisory group working on the report, claimed that most of the members of the group were in favour of legislation—but that this was not represented. Chan has asked for his name to removed from the report.

Chan blasted chairperson Professor Fanny Cheung Mui-ching for omitting the crucial detail, while dragging the publication in general: "The report has no direction at all. It doesn't even include a timetable of when the recommendations should be implemented."

The activists highlighted the fact that while many countries are moving towards gay marriage, Hong Kong lacks even the most fundamental assurances of equal treatment.

Denise Ho Wan-see said discrimination against LGBT people happens on a daily basis in the city. She urged the government to take action “before something tragic happens”, Apple Daily reported.