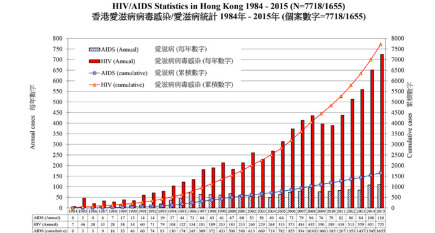 Record number of new HIV cases in 2015 in Hong Kong

Last year 725 new cases of HIV infections were recorded, the highest number since records began in 1984.

Hong Kong’s Centre for Health Protection (CHP) has released its HIV and AIDS statistics for 2015.

The vast majority of new cases were transmitted by sexual intercourse. 14 newly reported cases were due to drug injection and two through perinatal transmission.

The Centre also reported that half of the cases were acquired through same-sex intercourse and that most patients were young gay men.

The higher numbers could be attributed to a heightened awareness of the disease with more people getting tested.