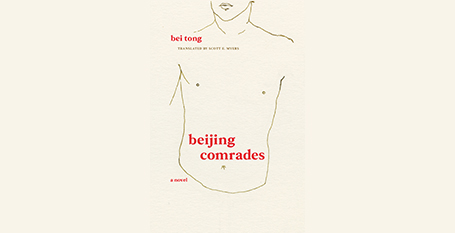 In the late 90s what would become the first gay novel ever published in China, began to appear on a popular gay website.

The author of what was then called Dalu gushi A Story From the Mainland) has never been known. The English version has been translated by Scott Myers.

Beijing Comrades tells the story of Handong, a businessman with an outsized ego and sexual appetite, and his unexpected love affair with Lan Yu, a young man from the provinces who has come to the city to study architecture.

Set against the cultural and political upheavals in China in the late 80s and early 90s, the narrative is at once a story about love, loss, and neoliberal capitalism.

The internet novel was adapted into a movie called Lan Yu by Stanley Kwan in 2001 and published as a novel in Chinese in Taiwan in 2002. It has never been published on the Chinese mainland.

The significance of the writing to a generation of homosexuals in China has been noted by Professor Liu.

"When [Beijing Comrades] came out, there was simply nothing like it in the Chinese language," Liu said. “It gave a voice to a group, and also to social issues that couldn't be articulated before this particular language was made available,” he said.

Here is an excerpt from the novel which is published by New York’s The Feminist Press.

“I kissed him with feverish excitement, pressing my body against his and travelling the length of his back with my hands. Gripping his shoulders, then his arms, I slowly lowered myself to the floor, pausing to kiss his chest, his stomach, his hands and fingers, until finally I was on my knees and his cock was in my mouth. I squeezed his ass, so firm and compact... then tried to put a finger inside. He trembled slightly but didn't stop me. When I went in a little deeper he pulled back and hunched over, holding the back of my head for balance as if he was about to fall.”