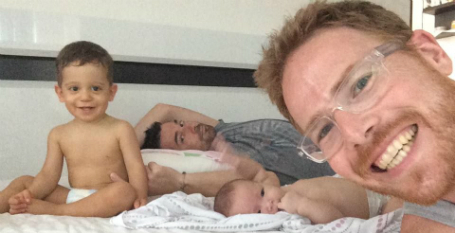 Gay couple in Bangkok go to court in custody battle

Gordan Lake, an American and Manuel Valero, his Spanish husband have been gripped in a custody battle and unable to leave Thailand for over a year.

The surrogate mother of their baby girl Carmen refused to sign papers that would allow the child to obtain a passport after discovering the parent's sexual orientation.

The two men have been living in hiding in the city with Carmen and their two year old son.

"It's the day we've been waiting for - for a long, long time. Today is one of the most important days of our lives," Mr Lake said outside Bangkok's Juvenile and Family Court. "The court should give us custody of Carmen because it's the right thing to do."

"Baby Carmen has the right to be with her biological father, who supports her financially and has cared for her since she was born," Mr Rachapol Sirikulchit, the couple's lawyer, told the Daily Telegraph. "The priority is to consider the benefit for children and that they have the right to live with their biological parent."

According to the couple, Patidta Kusolsang, the Thai surrogate, initially handed baby Carmen over to the couple on the day she was born, but changed her mind and refused to sign the required documents.

Lake is the biological father of baby Carmen, while the egg came from an anonymous donor. Kusolsang claimed she did not previously know of the parents' sexual orientation.

The pair's case is especially tricky as a slew of recent surrogacy scandals in Thailand prompted the country to pass a law banning foreigners from engaging in the practice.

The law came into effect after Carmen was born but may have a leaning on the case. The fact that Thailand does not recognise same-sex marriages may also affect the judge's decision.

Testimony is scheduled to be completed by March 31.