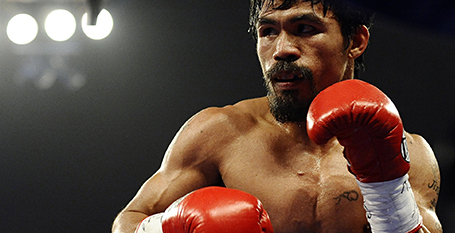 After the Filipino boxer/politician enraged the global LGBT community with homophobic comments this year, Hong Kong’s Foreign Correspondents Club has come under heavy criticism for airing his April 10 bout

Private members’ bars in Hong Kong have been encouraged not to screen Manny Pacquiao’s latest boxing match in Las Vegas on April 10 due to the boxer’s homophobic slurs.

Pacquiao's comments drew widespread condemnation from gay Filipino celebrities, rights groups and netizens. Speaking to a local station in February, the boxing champion told the interviewer "It's common sense. Will you see any animals where male is to male and female is to female?"

"The animals are better. They know how to distinguish male from female. If we approve [of] male on male, female on female, then Man is worse than animals."

Bess Hepworth of LGBT advocacy group Out Leadership said that although the FCC had “a proud history of supporting the LGBTI community” its decision to hold the event “would be a backward step”.

The FCC released a statement saying “The club has a history of hosting events, from guest speaker talks to televised sports matches, that feature people whose views members may find deplorable.”

“Views expressed at any of our events or shown on our televisions do not necessarily represent views held by the club, its board or its members,” it said.